Posted on October 8, 2020 by tyrantisterror 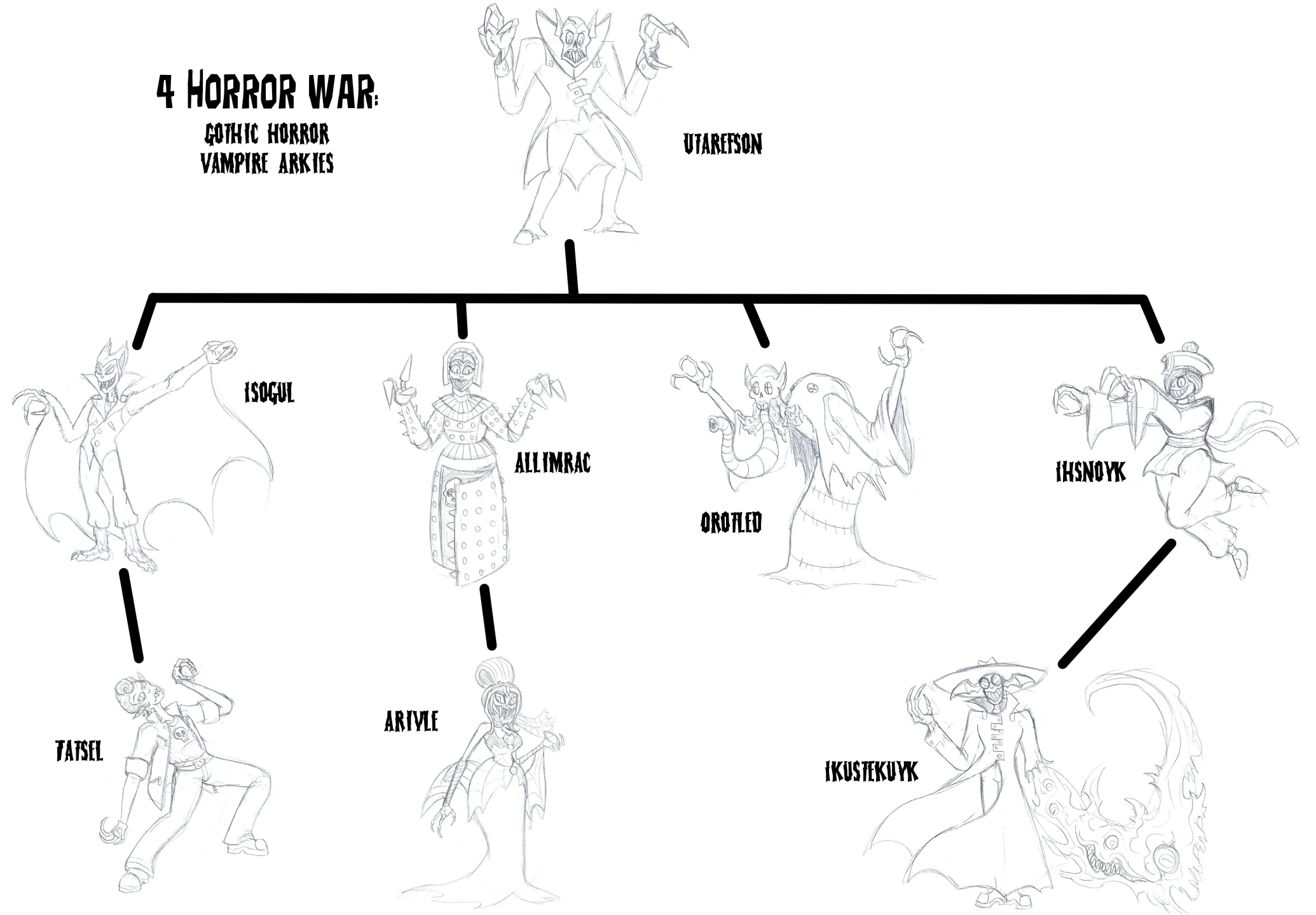 To celebrate Horror Flora‘s four year anniversary, I’ve prepared a special treat for you: a bestiary for a non-existent monster catching game inspired by this website’s Iconic Characters of Horror Fiction essay series. Welcome to 4 Horror War, where people raise different Archetypal Fears – “Arkies” for short – into powerful monsters, and then battle each other to prove the superiority of their chosen fears. I’ll be posting a different Arky family each day from now through Halloween – today’s Arky family of the day belongs to Gothic Horror, THE VAMPIRE FAMILY! Now, before we dive in to the gritty details, an explanation/reminder of how this non-existent mons game works. Unlike Pokemon, evolution is not necessarily an upgrade – in other words, the first stage of a given family is generally on par with the most “advanced” stage. Evolution reshuffles stats rather than straight-up improving them, allowing the Arky to function differently on the team. In addition to giving you alternate options/strategies for a given Arky, the family tree of each Archetypal Fear is sort of a huge meta-reference to how actual horror archetypes have, well, evolved in fiction. Though I’ve had to stretch now and then with the families to make every monster I wanted to make fit, the meta commentary is more or less accurate enough to make my inner horror nerd happy. Ok, enough pre-amble, let’s dive in: A diseased and ratlike creature, Utarefson is a grotesque monster that feeds on the blood of the living by tearing open their necks with its protruding fangs. This menacing monster rarely speaks, preferring to frighten its prey with an ominous silence before ripping out their throats. When given vocal training, Utareson evolves into Isogul, a theatrical vampire whose thick accent and dramatic mannerisms only add to its charm. With a hypnotic gaze and the ability to transform into a bat, this vampire excels at misdirection, keeping its foes on edge before it strikes the killing blow. If allowed to read trashy romance novels, Isogul evolves into Tatsel, a swooning heartthrob whose violent nature is only matched by its immense angst. With its perfectly coifed hair and bad boy fashion sense, this brooding vampire charms most who come into contact with it, leaving them quite unprepared for its deadly bite. If allowed to wear an Iron Maiden, Utarefson evolves into Allimrac, a deadly vampire whose strength grows with every kill it makes. Its iron plated skin makes it resistant to most of the conventional ways of killing a vampire, though its slow speed and lack of long range attacks force it to get in close before it can deal a deadly blow. If given a set of cheesy movies to make fun of, Allimrac evolves into Arivle, a sultry vampire whose cutting words are even worse than its bite. Sporting the best sense of humor of any vampire, Arivle can undercut any monster’s fearsome nature by pointing out how hokey they are. If allowed to feed on wild rats, Utarefson may get infected with parasitic worms and turn into Orotled. A vile creature, this vampire can assault its prey with all manner of disease and infections, leaving them a pus-filled rotting mess. If given a sacred charm, Utarefson evolves into Ihsnoyk, a hopping vampire whose agility in combat is unmatched by any others in its family. A far more physical combatant than most vampires, Ihsnoyk can go toe to toe with some of the strongest monsters in the world, ducking their blows and delivering devastating hits of its own to their pressure points. If allowed to eat a soul, Ihsnoyk evolves into Ikustekuyk, a vampire with a myriad of special powers. Capable of growing extra psychic eyes, manipulating blood into deadly new appendages, and even swallowing the souls of those it defeated in battle, this vampire is a force to be reckoned with.

This entry was posted in 4 Horror War, Monster Menageries and tagged 4 Horror War. Bookmark the permalink.