Posted on September 11, 2019 by tyrantisterror 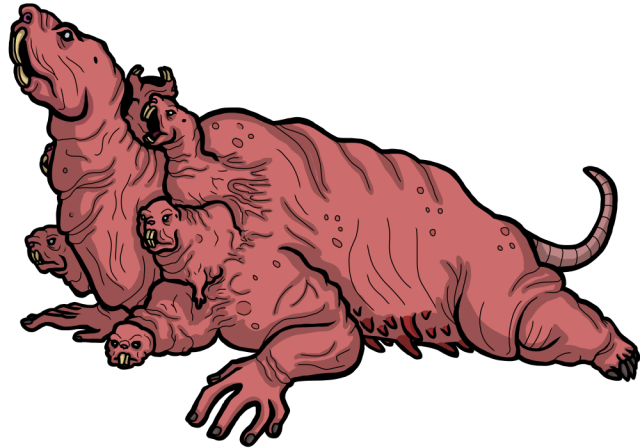 Biology: A test subject of many experiments, Cerberat is rare among the many kaiju made by the Spooks Organization in that most of the strange procedures she was forced to endure ended up failing to produce the desired results.  The most obvious of these failures resulted in her six extra heads – a result of an attempt to make a vertebrate reproduce by budding.  Only when she was exposed to Yamaneon radiation did Cerberat truly live up to her potential, becoming a nigh-invulnerable titan with more than enough power to survive the possible extinction event that all her previous ordeals were meant to help her outlast.

Personality: Having spent most of her life as a lab specimen in an ethically dubious organization’s secret base, Cerberat has grown accustomed to experiencing bizarre things, and as a result she took to becoming a giant radioactive monster better than most.  The enormous rodent is utterly unflappable, even when facing the most alien of monsters in the strangest of circumstances.

With separate but connected consciousnesses in each of her seven heads, Cerberat has the unusual pleasure of never feeling entirely alone, as she shares every experience with six close friends.  Whenever she feels anxiety, the massive rodent’s many other minds all console each other, giving her a great deal of confidence to match her unusually calm and collected personality.  Add in her menacing appearance and you have a kaiju whose demeanor is utterly frightening to others without her even having to act aggressive.

Which is to Cerberat’s benefit, as the massive rat doesn’t actually like fighting all that much.  When forced into a fray, Cerberat uses her strong muscles and massive bulk to beat her enemies into submission, and can deliver a number of powerful bites from each of her seven deadly mouths.  While not the most skilled combatant in the kaiju world, Cerberat’s unsettling aura and sheer strength make her a foe to be reckoned with.

This entry was posted in ATOM Kaiju Files, Monster Menageries. Bookmark the permalink.