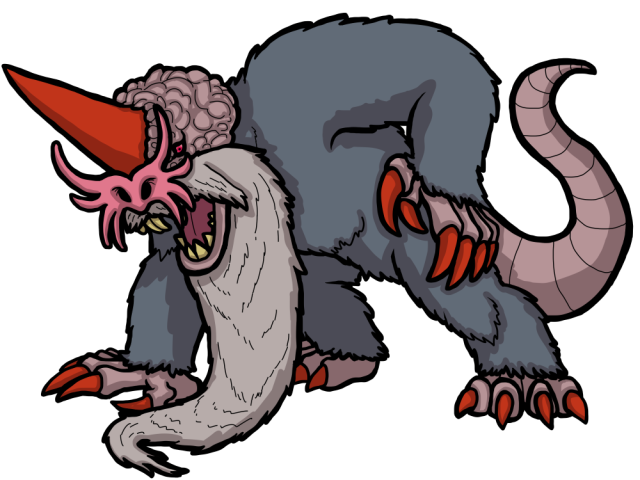 This ATOM Bonus Kaiju File was created by SkarmorySilver for the Revenge of the ATOM Create a Kaiju Contest!  The illustration and profile here is based on his work, and I highly recommend you check out his other work!

Aliases: The Beast of Emain Ablach, The Mutant Mole Monster, The Elder Gnome, Sciúirse Talún(”Scourge of Earth” in Irish)

Notable Stomping Grounds: The Emain Ablach Cave System,most of the coastal regions of Ireland and northwestern Europe, possible sightings in and around Scandinavia and the European Arctic circle, Echidna Island

Biology: Mutated from a strange prehistoric mole-like rodent, Gnomoran’s red cranial horn and long, shaggy “beard” of white hair make it loosely resemble a garden gnome, which in turn gave the creature its name.  Smaller than most kaiju, Gnomoran’s biology is strangely out of sync, as a genetic disorder has resulted in it producing far less white blood cells than normal, and those it does produce are woefully bad at identifying harmful bacteria and other pathogens.  As a result of this, the mammal’s immune system is woefully less effective than most kaiju’s, as unlike its fellow giants it cannot replenish its body’s defense system instantaneously to deal with micro-organism threats.  As if to course correct this, Gnomoran’s other cells reproduce at an even quicker rate than other kaiju, but lack the stability of reproduction that other kaiju enjoy.  This is why Gnomoran’s body (his head in particular) is filled with cancerous cysts and pus, and probably why the ancient kaiju is still so stunted compared to its (often younger) peers.  Diseased and pushed to the limit, Gnomoran’s twist biology shows that even a kaiju’s power isn’t impregnable.

Personality: As a result of Yamaneon exposure and atomic fossilization, Gnomoran’s regenerative factor seems to be quite enhanced even by kaiju standards. Combined with its toxic secretions, this makes it an unexpected threat and a daunting foe to face despite its size and seeming fraility, and as has been gleaned from personal accounts by many survivors of its attacks, the mutant talpid seems to be aware of this. It is chaotic and unpredictable, retreating one moment and barreling at opponents horn-first the next, and its ability to strike from unexpected angles and disappear without much fanfare has made for infuriating and often traumatizing experiences for both the various European militaries and enemy kaiju it’s encountered. The Pleistocene relic also has a sadistic, vindictive streak, exacting disproportionate retaliation and brutally mauling other life forms on its scale even if they only harmed it by accident, to say nothing of toying with smaller things like humans and vehicles like a child prone to breaking playthings on a whim. It also cares little for self-preservation due to its healing factor and is highly aggressive to beings that upset it as a result, having the audacity to fend off kaiju several times its size. The mole-beast is infamous for picking fights with others without rhyme or reason, attacking even when its remaining instincts aren’t informing it that it is hungry.

Reportedly, kaiju who weren’t as violent as Gnomoran itself have learned to simply leave rather than engage the creature whenever it drew near since its emergence, presumably having witnessed the bloody aftermath of its fights during their own travels. Many in fact preferred not to draw its attention if possible, lest it decide to chase them down and exercise its self-perceived entitlement to chronic and sustained cruelty. Strangely enough, however, more than half of the sightings of the creature since the Glasgow incident involved the provocation of an even bigger, more powerful beast, with Gnomoran sustaining severe or even mortal injury upon disengaging. Some have speculated that it may even have enjoyed being mangled each time, explaining why it incited such fights so often. The kaiju has even been known to quite happily hurl itself right into dangerous territory such as hazardous environments and obstacles, fights where it is severely outmatched, or even disasters it has bought upon itself, further validating these claims.

Humanity fares even worse against the monster, for obvious reasons, and military efforts have thus far only raised its ire ever more greatly. Vehicles and groups of people attract its predatory instincts, as its brain is hard-wired to view smaller creatures as prey, especially in groups. Whenever it has made landfall, it seems to have made a beeline for coastal villages and suburbs. Its experience in Glasgow seems to have taught it not to venture into major cities, however, which is just as well, since the collateral caused by both it and military actions against it would be too great if it decided to attempt another municipal raid. Although it doesn’t even need organic sustenance anymore, it is still compelled to consume large amounts of small prey due to its mentality remaining the same as that of a much smaller creature. This compels it to seek populated regions, forcing military retaliation and fueling its contempt for humanity in a vicious cycle. This is why many north-European coastal nations have since made evacuating rural areas their first priority in the event of its appearance, only employing martial resistance if left with no other choice.

Many scientific reports related to Gnomoran have turned up one distressing commonality: living cell matter associated with the mole-beast has been known to spontaneously develop into tumors even in containment or otherwise in isolation of the source, and some have speculated that the monster’s own inner anatomy constantly experiences the same issue, with every muscle, organ, and neuron growing, eroding, and re-growing at an explosive rate. Combining this with accounts of its cries constantly sounding as though it were severely hurt, along with its habit of intentionally blundering into hazardous situations, a few analysts have even speculated that this aspect of its biology causes the kaiju immense pain on a constant basis, which may explain why the creature is so pugnacious and prone to violence and self-harm: its own runaway growth may be railroading it into waging war with others so that its own constantly growing flesh can be broken, battered, and ripped away from itself before it overtakes its critical anatomy, condemning it to an agonizing fate far worse than death.

In summation, it seems that Gnomoran is a beast that has vastly overstayed its welcome, both on Earth and compared to the expected lifespan of its kind, and the inadvertent prolonging of its mortal coil has thrown some catastrophic side-effects into the mix. While its behavior may be an indicator that it is vaguely aware of this notion, its instincts have sadly locked it into the violent, self-destructive path it has followed for far too long. The mole-beast is indeed a monster – but not an entirely unsympathetic one.

This entry was posted in ATOM Kaiju Files, Monster Menageries and tagged Revenge of the ATOM Create a Kaiju Contest. Bookmark the permalink.