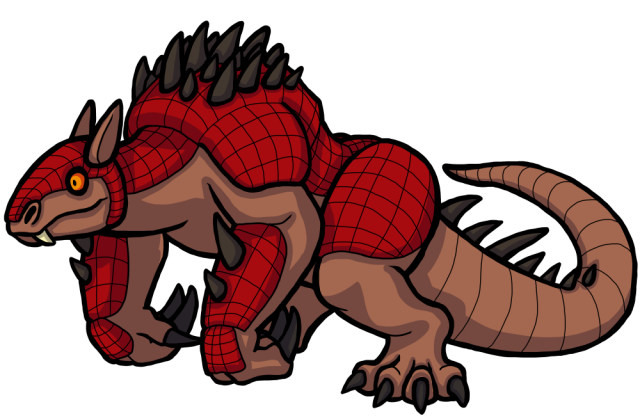 This ATOM Bonus Kaiju File was created by Scatha5 for the Revenge of the ATOM Create a Kaiju Contest!  The illustration and profile here is based on her work, and I highly recommend you check out her other work!

Biology: Initially mistaken for a Retrosaur of the Armored Goliath clade, Rerradon was only correctly identified as a prehistoric armadillo when more seasoned zoologists and paleontologists got to examine him.  The heavily armored mammalian monster is a somewhat close relative of the Russian kaiju Glypton, though significantly larger and bulkier.

Like all kaiju, Rerradon is gifted with several powers. These include:

Personality: Like his smaller kin, Rerradon is mostly a shy creature, preferring to stay out of conflict as much as possible.  When it is not possible, however, Rerradon is more than able to defend himself. With his thick armor plating, huge-if blunt-claws, and bulky arms, he is an able fighter.  With his ability to roll into a ball, protected all over by his plates, he is tough to injure. Add his ability to propel himself like a cannonball, and he is a formidable opponent.  He does not enjoy fighting over much, but he can and will if pushed.

Rerradon is plodding and slow, taking his time to get anywhere he is going.  He’s laid back and calm most of the time, and seems to be intelligent enough to avoid human settlements.  Indeed, it took a while to even notice his existence because he was so good at hiding in what was basically plain sight.

Rerradon is willing to work with other kaiju if their goals align, and can even be stirred to fight if the need is dire.  He enjoys the company of other kaiju, but is also just as happy to be alone.

When stirred to fight, Rerradon will be brutally efficient.  He hits weak spots with accuracy, is oddly agile for such a heavy armored beast, and is not afraid to keep hitting something until it simply stops moving.  He gives little room to back off if he can press advantage, and if needed, will simply roll into a ball to wait out an assault.

After rolling into this armored ball, Rerradon is able to flick his heavily muscled tail and send himself cannoning into a foe, hitting them with the full force of both his weight and his momentum.  The spikes lining his body tear flesh and the blunt force breaks even thick kaiju bone.

Luckily, even with his size and strength, Rerradon prefers a life of ease and peaceful wondering.  He’s not particularly threatening if left alone, and does his best to stay away from conflict.

This entry was posted in ATOM Kaiju Files, Monster Menageries and tagged Revenge of the ATOM Create a Kaiju Contest. Bookmark the permalink.