Posted on August 8, 2019 by tyrantisterror 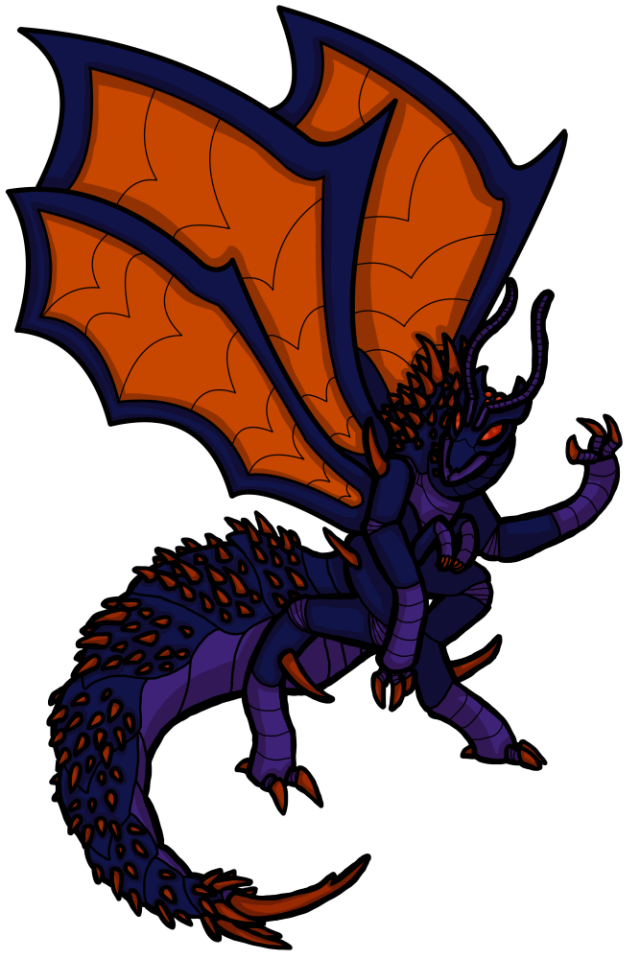 Biology: While fairly similar to non-kaiju wasps in most respects, Helhornet’s limbs are adapted for a bipedal gait similar to many Japanese arthropod kaiju, such as the famous brawling beetle Nastadyne.  Whether this is an oddly common (yet not universal) Yamaneon radiation induced mutation, or simply a result of convergent evolution on the parts of their ancestors is unknown.  Regardless of its origin, Helhornet is well adapted to its unusual body plan, being a skilled brawler and ruthless hunter.

Personality:   Unusually swift for a kaiju, most creatures that intrude on Helhornet’s privacy are neutralized before they even see the insect coming for them.  The extremely potent venom in the wasp’s stinger can paralyze most monsters within minutes, and its lean yet powerful limbs can deliver a flurry of devastating blows to its victims.  Combine this combat prowess with the insect’s extremely territorial nature and short temper, and you have a recipe for one vicious giant monster.

However, there have been rare occasions where the wasp was unable to defeat its enemy quickly, and each of these battles has given the insect pause.  When faced with a foe that provides adequate resistance, Helhornet’s attitude radically alters on the spot, as it can’t help but be curious as to how its enemy offers such resistance.  Curiosity turns to fascination, and, should the enemy last long enough, Helhornet quickly regards its tenacious enemy with something akin to respect or even affection.  Creatures that give the wasp good sport will soon find it following them out of admiration, even coming to their aid in times of trouble.

Like many kaiju, Helhornet shows an open-ness to and desire for companionship that would generally be considered impossible for its mundane relatives, and will go out of its way to socialize with monsters it likes.  While its tendency to pick vicious fights with other monsters hasn’t won it many friends, the few creatures Helhornet has befriended seem to value it in turn, and the wasp can be rather peaceful if it is allowed to stay with its chums undisturbed.

This entry was posted in ATOM Kaiju Files, Monster Menageries and tagged hornet. Bookmark the permalink.