Posted on April 5, 2019 by tyrantisterror

Herein I continue my rambling review of some of the monsters from the Monster Hunter franchise (of which I have only played one game, the Mons game spinoff Monster Hunter Stories)!  In today’s entry, we look at the critters in the latest entry of the main series, Monster Hunter World!

We’re gonna skip right ahead to the small predators who have one big boss monster in charge.  Unlike the Bird Wyverns of past generations, this time around our small monsters are BIG OL’ LIZARDS!  Well, ok, Great Girros is more of a snake dog, but same difference, right?  Great Jagras, however, is 90% iguana, 10% reggae.  It also swallows enemies whole, and if you think the internet hasn’t jumped on THAT imagery, you are a purer soul than I. 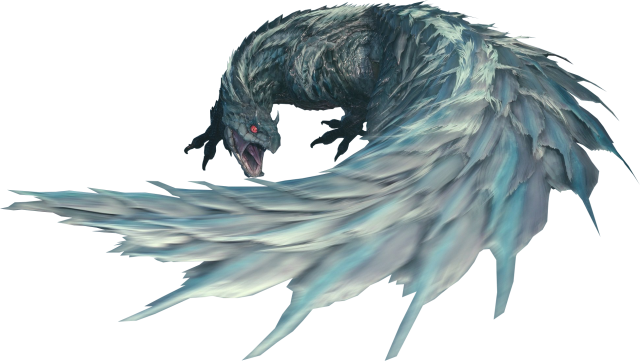 Tobi Kadachi feels like it belongs with these two despite technically being a higher caliber of foe.  I mean, it’s a snake dog – or rather a snake-flying-squirrel-dog, with a bit of pangolin through in for good measure.  Before now the Fanged Wyvern group just contained a lizard-wolf and a lizard-fox, but look at it now!  Hell, we’re not even done!

But let’s go to a more familiar place first.  Kulu Ya Ku is a goofy bird wyvern in the vein of Yian Kut Ku, with a dodo-like head on a velociraptor body and an adorable habit of using big rocks or eggs to defend itself.  I’d feel bad hunting this thing, honestly.  It deserves to be left alone to play with its rocks. 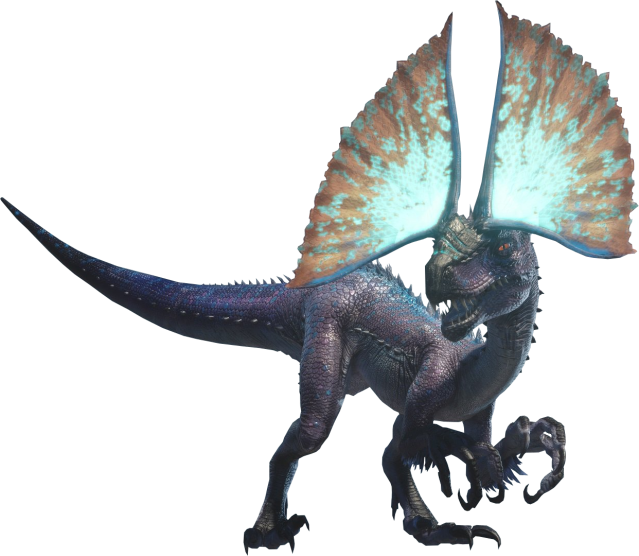 Tzitzi Ya Ku, meanwhile, has a more devious defense: it blinds you with light from its forehead crests!  This is a tactic hunters sometimes use against the monsters in these games, and I love that the franchise has slowly had the monsters mimic the player’s own mechanics to defend themselves.  It’s a cool detail that really fleshes out the world a bit more.  I also like this nasty fella’s grabby hands – look at those talons!  It may be on the small side, but Tzitzi can mess you up!

There’s not a lot that Legianna does that other flying wyverns don’t already do, but it’s pretty and I like its leaf-like wings.  It’s a good mid-tier monster. 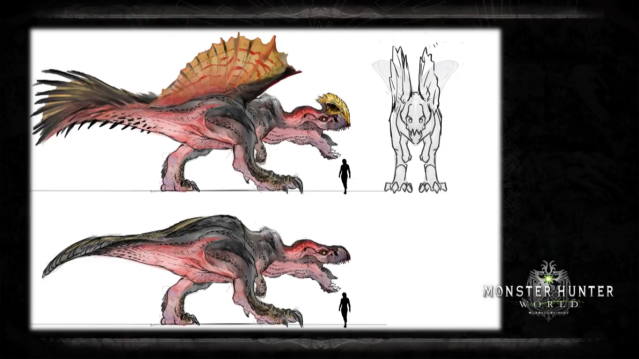 The Brute Wyvern Anjanath feels like the “Face” of Monster Hunter World to me.  It featured in a lot of the pre-launch teasers for the series, and is sort of the big badass of the first area (until Rathalos shows up and kicks its ass).  I love its Vulture-saurus Rex vibe, but my favorite detail of this design are the teeth growing out of its chin.  Why?  Because Deviljho, a larger brute wyvern, has similar chin-teeth – a lot more, granted, but still!  Looking at them side by side, you can see that Anjanath is a close relative to Deviljho – perhaps moreso than the other Brute Wyverns, which is really cool!  It’s not explicitly spelled out, but I like that you can occasionally see close family connections between different monster species in this series.

Anjanath also has the ability to flare up, popping frills from its nostrils as well as weird proto-wings from its back.  I wonder whether that’s supposed to imply a connection to the Elder Dragons, since many of them have six limbs.  Are Brute Wyverns descended from a specific Elder Dragon lineage?  Do the other classes likewise have Elder Dragon ancestors?  It’s interesting to consider!

Look at this red and rabid murder monster!  Odogaron is a badass Fanged Wyvern who looks like what would happen if you gave a gorgonopsid the T-Virus.  What grisly and vicious looking lizard puppy this fella is!  I love it.

Jumping around  again, Pukei Pukei is our requisite “gross” monster, and is so named because it vomits poison from both its mouth and its tail tip!  while the toilet humor monsters normally gross me out, Pukei Pukei’s design has so many gecko elements in it that I can’t help but still find it incredibly endearing.  It may be a slimy puking monster, but it’s an adorable slimy puking monster! 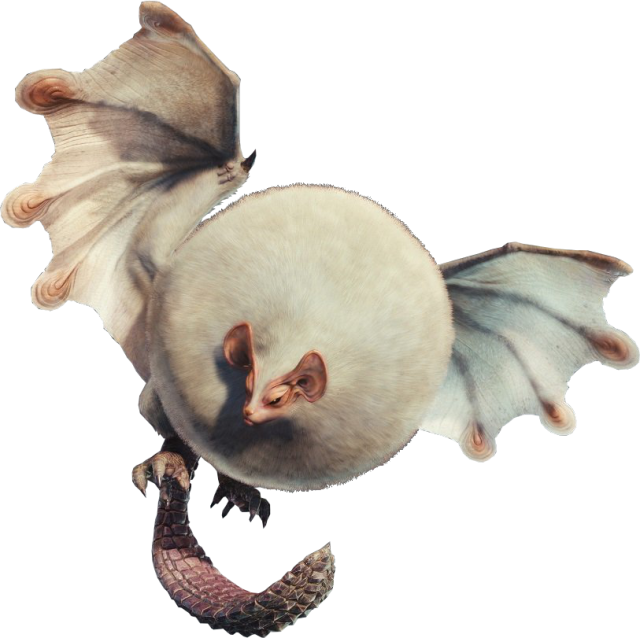 It’s no Rat-Bat-Crab-Spider, but it’s pretty cute I guess.

We’ve already seen a lot of zaniness, but somehow Paolumu still seems uniquely weird for the series – but in a good way!  The big puffball is adorably weightless when in flight, floating and bobbing like a balloon.   I love how its overtly bat-like design still has room for gecko toe pads and a scaly beaver tail.  Adorable and weird!

THE BIG ONE, THE BIGGEST BOI 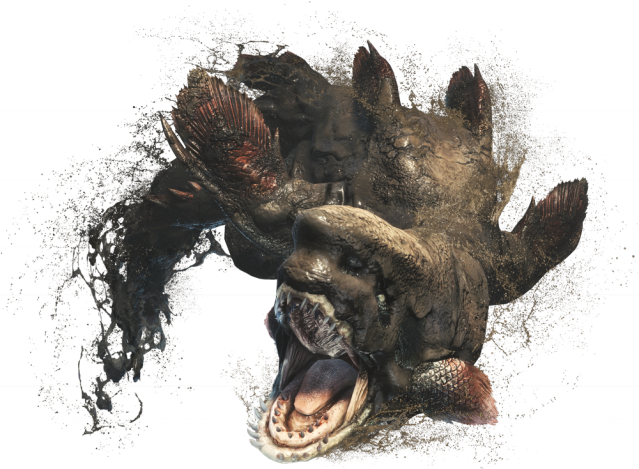 Remember Plesioth and Lavasioth?  Well, this is their mud-dwelling cousin, Jyuratodus.  It’s a stinky fish dragon!  Probably my least favorite of the sioths, but it’s still a good sticky fish monster.

Radobaan, aka Uragaan’s goth cousin.  I like that they took a goofy design like Uragaan and made it so METAL.  Radobaan has seen some shit, you can tell.

Let’s turn on the juice and see what shakes loose

Bazelgeuse, named after a star and one of the princes of hell, is a massive flying wyvern that carpet bombs its prey with its detachable exploding belly scales.  If that weren’t enough, it also has a tendency to fly into territory when you least expect it – that’s right, it’s a flying counterpart to the DEVILJHO.  It’s acorn-bearded lion dragon vibe was enough to win my heart on its own, but this demonic bastard’s tendency to show up out of nowhere to escalate a situation put it over the top.  This fella won my heart almost immediately, and if the world blesses us with a sequel to Monster Hunter Stories, I hope this fucker’s on the roster because I want to train it!

One of the plot points of Monster Hunter World is that the new land you’re exploring contains the Elder Dragon equivalent of an Elephant Graveyard, which Elder Dragons flock to from time to time.  One of the new Elder Dragons the game introduces is Nergigante, an Elder Dragon that is specifically adapted to prey on OTHER Elder Dragons.  Nergigante is thus kind of over-the-top by necessity, as this is a badass designed specifically to hunt the most dangerous game.  The ginormous horns, beefy arms, and armor plated spiky wings make it a formidable foe, and has a pretty decent healing factor to boot!  It’s a nice rowdy-lookin’ monster, and a good start to this game’s big boss monsters. 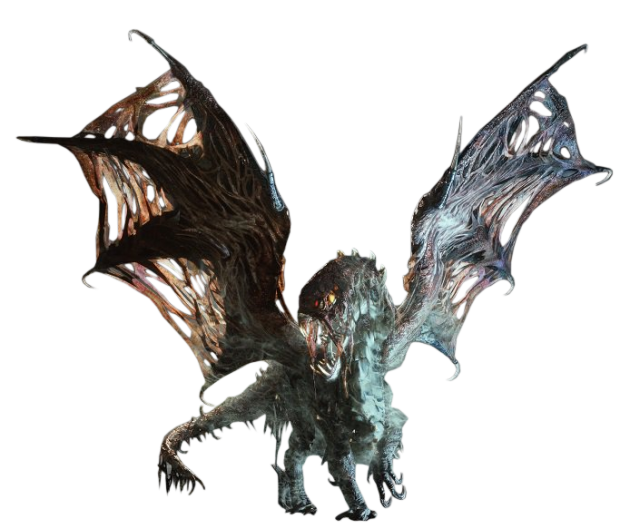 Val Hazak plays with the Elder Dragon graveyard plot in a different way.  An ambush predator, it hides in piles of corpses to wait for scavengers, which it then drains of life force.  It’s vague how much of Val Hazak’s tattered appearance is natural and how much is a result of it hiding in carrion, but whether it’s a dragon wearing a skin suit or just a dragon that LOOKS like it’s wearing a skin suit, it’s a creepy ass bastard and I love it. 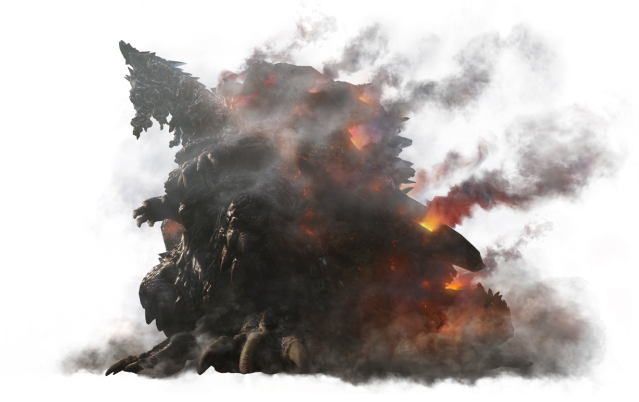 Zorah Magdaros is one of the Elder Dragons that comes to the new world explicitly to die, and is a monstrously large creature even by the standards of this franchise.   We’re talking AT LEAST Godzilla size if not larger, looking for all the world like a living mountain that got up and walked around.  Its mere existence suggests that there are even stranger things in the world of Monster Hunter than what we’ve already seen, which is one of the goals of the Elder Dragons as a concept – they’re the monsters that make you feel small when you’ve master the art of cutting up flying t.rexes. 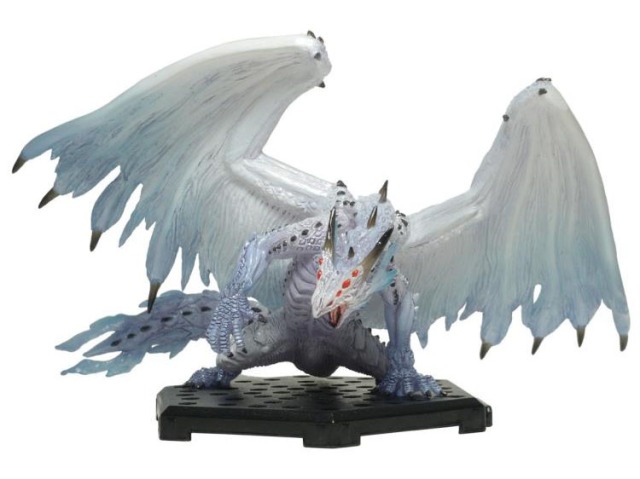 There are no good clean renders of this fucker, so enjoy this tiny plastic toy.

Xeno’jiiva is the final boss o this game and feels just a tad underwhelming after what preceded it.  We had a brawling battle boi, a corpse-wearing hell drake, and a walking mountain, and it all leads up to… an elder dragon with some extra eyes.  They’re pretty eyes, though!  Honestly, Xeno’jiiva is a good design and has more than enough personality to be outstanding, but it just can’t match the great acts that preceded it.

Our final Elder Dragon was added via DLC, but is a welcome addition all the same.  Kulve Taroth is a big lizardy dragon that is draped in glittering golden armor – like if Smaug decided to get real flamboyant and turn the old treasure waistcoat into a friggin’ prom dress.  It’s fun to see this series play with the trope of treasure hoarding dragons, and I love that they gave it such a unique twist.  It makes for a really memorable monster, and perfect note to end on.

This entry was posted in Creepy Columns, Monster Spotlight and tagged Monster Hunter. Bookmark the permalink.