Posted on April 5, 2019 by tyrantisterror

Herein I continue my rambling review of some of the monsters from the Monster Hunter franchise (of which I have only played one game, the Mons game spinoff Monster Hunter Stories)!  In today’s entry, we discover my favorite monster class of the franchise, and things get VERY Ultraman-y.

As per custom, we’ll start by looking at some new herbivores in the ecosystem.  Gargwas is a sweet creature that looks like a cross between a duck and a cassowary, but with none of their respective violent tendencies.  Epioth is a nice little lake monster (cause the carnivorous lake monsters need food too), and Renoplos is a spunky little armored reptile that fights back against its predators!  They’re all pretty neat.

We also get some new small predators in the vein of Velocidrome: Jaggis, Baggis, and Wroggis.  The Great Jaggi is probably my favorite of the three. and on the whole these three seem to emphasize the reptilian bits of their anatomy more than their predecessors, which pleases me.

Whoooooo lives on a lizard’s neck over the sea? Spongebob Neckgrowth!

We also get a new monster class this time around, the Leviathan Class, which is composed of a bunch of sea monster style reptiles.  The Royal Ludroth fills a niche similar to the Great Jaggi, being the largest of a species of small predators.  It has a nice mix of monitor lizard and agamid traits in its design, and while the spongy main grosses me out for reasons I can’t quite articulate, I feel it’s still a pretty cool design element nonetheless.

Remember how last time we added a bunch of funky monkeys to the roster?  Well, now we’re adding a bunch of bears.  Slagtoth it the gentlest of them, and the least bear-like in appearance.  It’s like a bear mixed with a rhino mixed with, like, a dinosaur.  It’s cute, I like it. 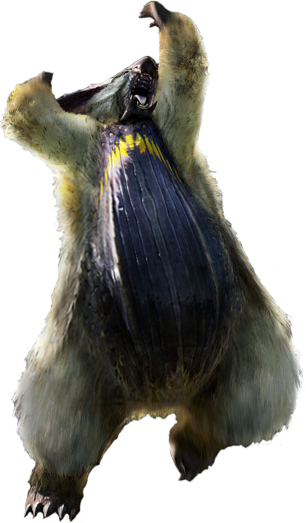 What kind of man hangs out with a six foot tall rabbit anyway?

Lagombi, meanwhile is like a bear mixed with a rabbit.  That’s pretty neat!  I like its weird beaky face and its armored stomach – they’re suitably weird touches to keep this from being too straightforward a hybrid.

Volvidon is way more my jam, though.  Let’s count all the shit I see in this design: bear, obviously, but also crocodile, armadillo, and, dare I say, maybe even a little beetle?  It’s an insane hybrid, and I’m downright jealous of how well the designers managed to blend those disparate elements into a cohesive whole.

Oh hey, it’s the weird lizard bear I wanted to have hang out with the panther dragon in the previous entry!

Arzuros, meanwhile, is the most bear-y of bears.  And yet even it has fun and distinctly chimeric elements – the scaly arms and feet, the big claws, the armored back, the green fur!  It’s a bear, yes, but it’s also a weird lizard bear.  Goddamn I love Monster Hunter!

You can’t help but smile when these fellas sing.

Qurupeco is our requisite weird Bird Wyven, though this time there’s a really delicious twist.  This pretty bird monster sings a nice little song, you see, and when it does it summons another monster from the same area – often a monster that is of a much higher level than the Qurupeco itself!  They end up being dreaded because, while they’re not too strong on their own, they can make your day much, MUCH worse if they get to sing. 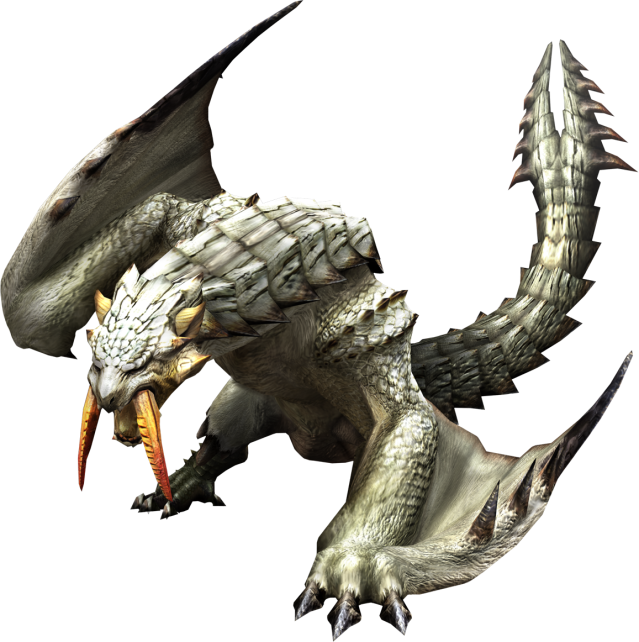 Barrioth is a Flying Wyvern in the vein of Nargacuga, in that it’s a kitty cat dragon.  I love those big exaggerated sabre tusks it has, and how its body is only sparsely furred – some of its most catlike features are also scaly, which is pretty cool.  You don’t see too many scaly cats.

The child of Jon Snow and Daenerys Targaryen?

But don’t worry canine fans, Monster Hunter hasn’t forgotten you!  Zinogre is the big wolf to Nargacuga and Barrioth’s big cats – in that it’s clearly a lizard who just happens to resemble a wolf about the face.  It’s got fur, sure, but the sprawling stance, the scales, the big long tail – it’s a lizard.  A lizard with a wolf-y face.  God I love Monster Hunter!  Zinogre is the first member of yet another new Monster Class, the Fanged Wyverns (not to be confused with the Fanged Beasts). 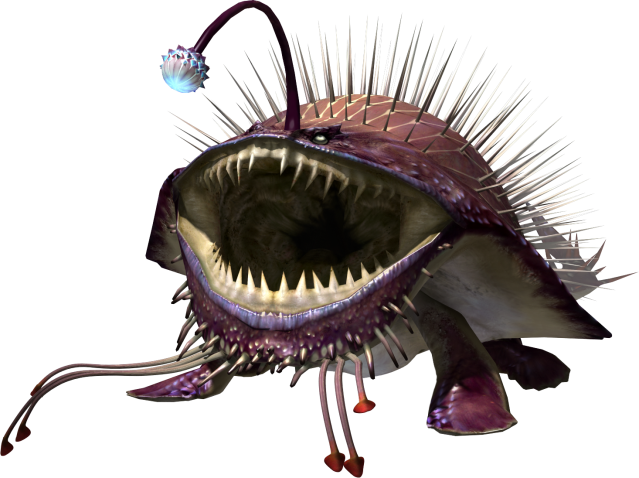 I mean yeah it’s scary, but you also kind of want a plush toy of it too, right?

Our second Leviathan Class monster, Gobul is a big frog… newt… anglerfish… pufferfish monster.  Again I have to commend this series for blending its influences so thoroughly – though you can look at this creature and pick out the parts that belong to various real world creatures, they all feel like a cohesive part of one animal in this design.  Plus there’s so much personality in that big mouth and those tiny, furious little eyes!

Hmm, pale leech dragon that hangs upside down and is unsettlingly phallic… haven’t we seen one of these before?

This fella, Gigginox, plays with the same basic ideas as the Khezu.  I think it’s a little less creepy this time around, but it trades the revolting aspects of Khezu for parts that are almost beautifully weird.  It’s less gross, but more eerie.

Plus it has cute little gecko feet!

So… like… lava works differently in this world, right?

Agnaktor is our fourth Leviathan Class monster, and basically answers the question of “What would it be like if a sea serpent lived in a volcano?”  I love its long crocodile jaws, complete with Gharial style nose bumps, and its beautiful dorsal fins.  It’s a beautiful lava dwelling croco-snake, and you can’t go wrong with that.

I will not fail to speak of Leviathan’s limbs, its strength and its graceful form. Who can strip off its outer coat? Who can penetrate its double coat of armor?

Lagiacrus is my third favorite monster from the franchise.  It’s got a bit of cobra, it’s got a bit of crocodile, it’s got these big craggy spikes and a quintessential sea monster vibe with a prehistoric flavor on top.  It’s a lovely, lovely sea monster, and utterly fitting of the Leviathan label.  Easily one of the coolest monsters in the series, even if you don’t have my specific weird reptile-focused tastes.

Aw, look at his widdle eyes!

The adorably named Nibelsnarf is a big sand-dwelling leviathan.  Though the lizard elements are strong, it’s also got bits of turtle and flounder mixed in, especially with those big eyes on the very top of its head.  Despite its goofy face and name, it’s still an imposing beast, and it has an impressive sense of mass to its design.  It looks like what would happen if a sea monster evolved to live in the desert.

When I caught one of these in Monster Hunter Stories, I named her Caramel.

A LOT of new classes today!  The Brute Wyverns are a group of super buff theropod-ish reptiles, the kind of prehistoric monsters that do Gwangi and Godzilla proud.  Barroth is our first example of the class, and what a great example it is!  That head crest feels straight out of Ultraman, and I love it tiny little eyes nestle in between its armor plated skull and above its big, wide, muppet-from-hell mouth.  Barroth isn’t the toughest this class has to offer, but one look at it sells the class’s name entirely.  These are BRUTES.

Barroth may also be my fourth favorite monster in the series.  It’s just so cool! 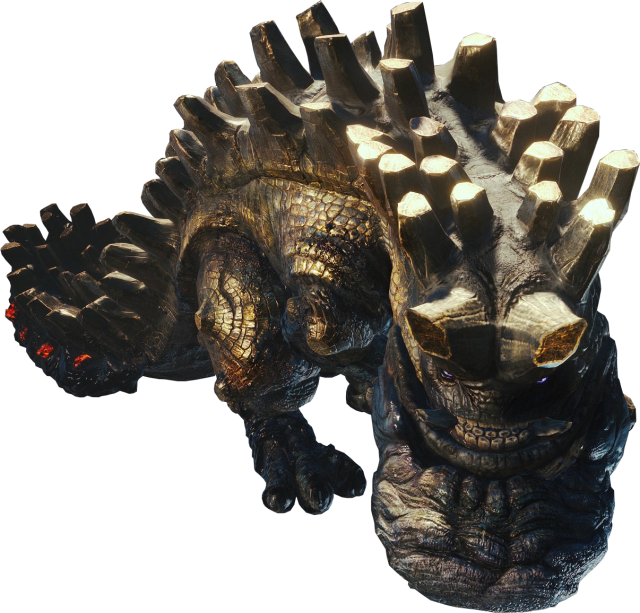 With a chin like that he should have a lead role in Transformers Animated.

Uragaan is our next example of the Brute Wyverns, and a particularly beefy one at that.  I love the weird, blunted spines covering its back, as well as those Oni-style tusks and that sizable chin.  Uragaan will actually set off natural gunpowder deposits to explode upon hunters, turning the tables on them (as setting traps is usually what the player does to level the playing field). 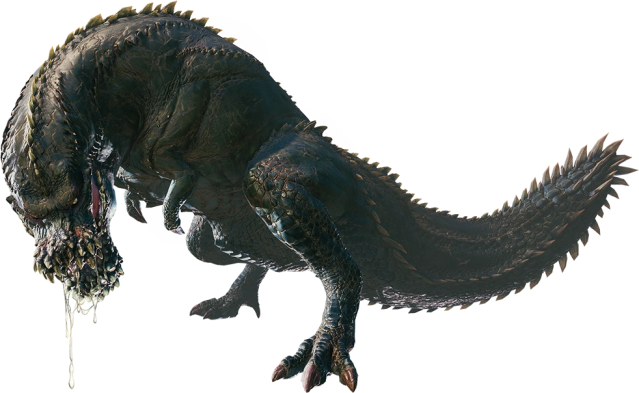 By far the most infamous Brute Wyvern, and my second favorite monster from the franchise, is the notorious Deviljho!  Enormous, indomitable, and driven by an unending ravenous hunger, the Deviljho is infamous not just for its immense strength and ferocity, but for its status as an invasive species.  Deviljhos travel FAR in search of food, and are hungry almost constantly.  In gameplay terms, this means they have a habit of popping up ANYWHERE AND EVERYWHERE.  Think that early game forest full of Velocidromes is a safe place?  Nope, the big pickle of doom is here to give you a bad time!  It’s been said that, if Rajang is Monster Hunter‘s King Kong, then Deviljho is its Godzilla.

In Monster Hunter Stories, I named my Deviljho Corncob.

Who’s ready for some BAJA BLAST?

Brachydios takes the Brute Wyvern class in a weird yet welcome direction, having the largest and strongest arms of the whole group.  What does it use those arms for?  Why, to cover its foes in explosive slime!  That’s right, it’s a boxing T.rex who coats its hands in napalm!  God bless your crazy mind, Monster Hunter.

In Monster Hunter Stories, ever monster has a “kinship move”, i.e. a super special attack they can use when you’ve made them feel really loved.  You owe it to yourself to look up Brachydios’s Kinship move – trust me, it is not to be missed.

Every family has a vegetarian who makes Thanksgiving awkward.

Duramboros is our final (for now) Brute Wyvern, and stands out in the class by being a docile herbivore.  Its features have a bit more mammalian touches as a result, with rhino-like feet and furry patches on its underbelly.  It’s still a big armored tank of a beast though, and I dig those horns. 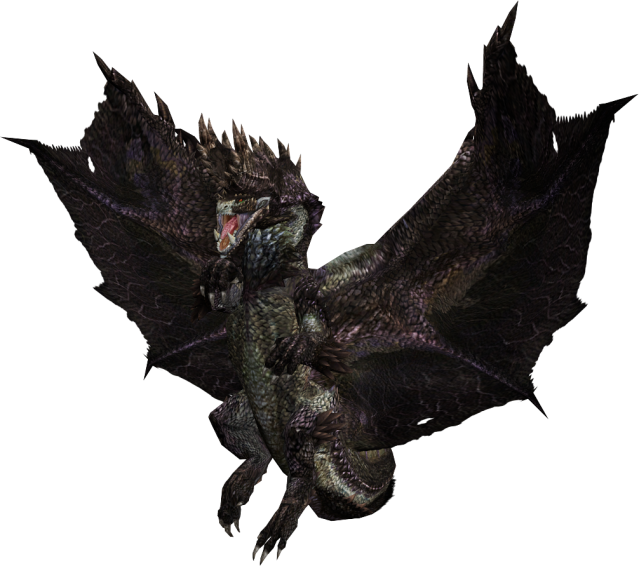 This is the clearest screenshot I could find, which unfortunately is damning with faint praise.

We’re onto the Elder Dragons now, and once again we have one that’s pretty close to a standard dragon with Alatreon here.  I like it’s spiky horns and snakey face, and overall its body has a nice desert reptile vibe.

Amatsu continues the sea monster motif we have with this bunch, going for grace and beauty where the Leviathans that preceded it went for ferocity.  Despite its gorgeous fins that remind me of Orchid blossoms (oddly enough), it still looks very formidable – a mix of beauty and strength that fits an Elder Dragon. 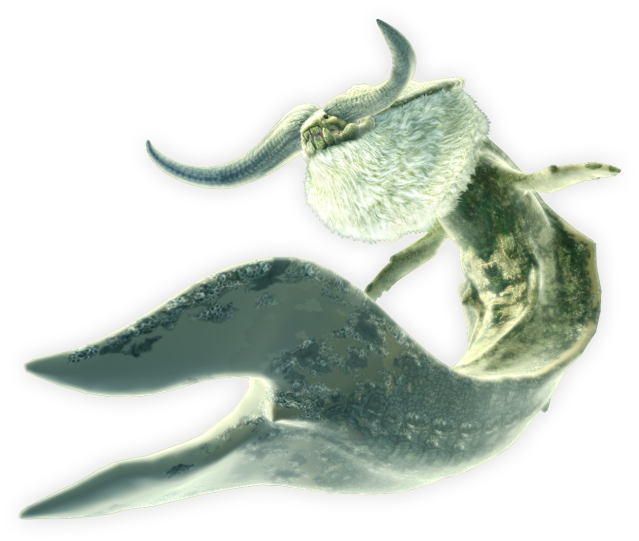 Ceadeus continues in that vein, doubling down on graceful sea creature features.  My favorite detail on this fish/whale/lizard is its Dunkleosteus inspired noggin, which looks like delicate porcelain when set within this almost ethereal design.

Dire Miralis goes in a different direction, looking downright hellish with its molten cores and jet black armor.  Yet there’s one again a hint of frailty – those legs look almost fetal, as if they haven’t finished growing, and the skin around those molten cores feels broken.  This is an Elder Dragon that looks oddly young – almost like it was born prematurely.  That’s a creepy and pitiable trait you don’t normally get in a lava monster. 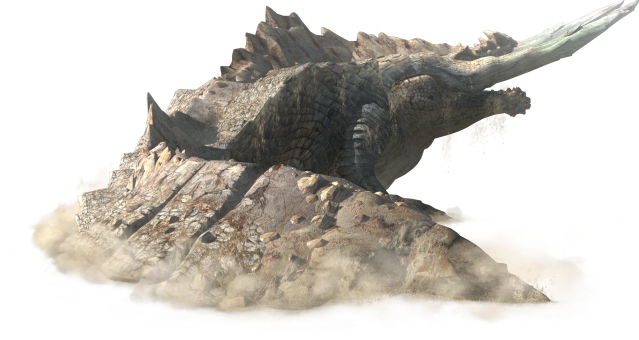 After those heady concepts, it’s kind of refreshing to go back to an Elder Dragon that’s just a big gnarly sand-dwelling crocodile.  Thank you, Jhen Mohran, for being a big crocodile – not much more, not much less.

This entry was posted in Creepy Columns, Monster Spotlight and tagged Monster Hunter. Bookmark the permalink.