Posted on January 1, 2019 by tyrantisterror 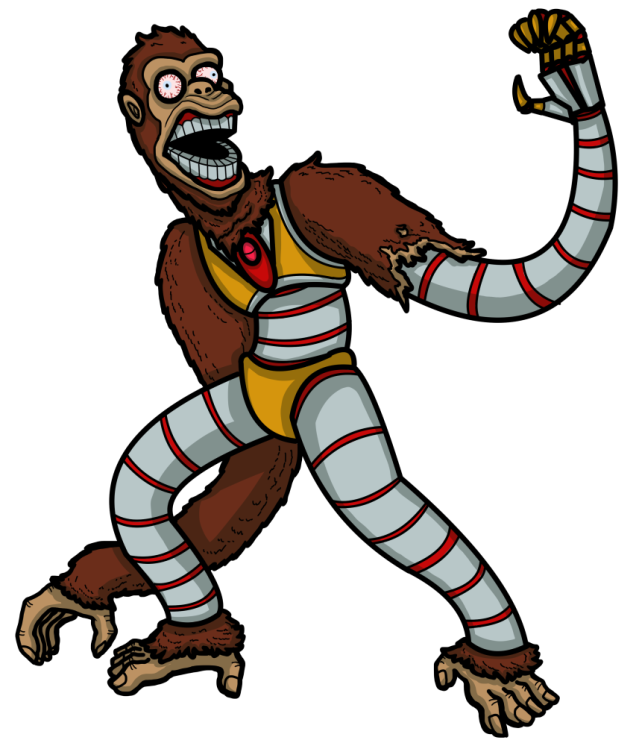 Cyber-Biology: Though more technologically sophisticated than its fellow cyborg, MechaTyrantis, the Facsimile Ape is also the product of a far more cruel and demented approach to science, blending the organic components of the unfortunate kaiju that serves as its raw material with cybernetic enhancements that are as cutting edge as they are invasive.  Mercifully, the living brain at the center of the cyborg has been lobotomized so thoroughly by its integration with its artificial nervous system that the beast at the heart of this machine is no longer capable of recognizing what it has become, being little more than a puppet for the human who interlinks with its computerized processors.

As result of both the devious scheming and theatrical flair of its creator, the Facsimile Ape was initially disguised as a purely organic monster, though the unnatural movements of its limbs and face gave the show away.  The layer of artificial skin and hair that still lays over parts of its body is far more durable than it looks, though enough manhandling by non-augmented kaiju managed to strip the bulk of it off of the cyborg.

While only its deepest tissues, hidden by layers of circuitry, wire, and metal armor, benefit from the traditional kaiju powers, the mechanical portions of the Facsimile Ape sport a powerful arsenal of their own:

Personality: No one save the Facsimile Ape’s creator knows what the kaiju that became this cyborg was originally like.  Whatever personality the creature had is gone now, along with its capacity for thought and feeling.  The Facsimile Ape is little more than a shell, its nervous system reduced to a series of senses and reflexes that have been redirected to feed into one of the most highly advanced computer systems the world has ever seen.  While the cyborg was noted for its manic, feral, and downright deranged fighting style during its rampages, these were all a result of its pilot’s personality, proving that one doesn’t need to be a beast to behave in an unnerving manner.

This entry was posted in ATOM Kaiju Files, Monster Menageries and tagged cyborg, Kaiju, The Facsimile Ape. Bookmark the permalink.