Posted on October 24, 2017 by tyrantisterror 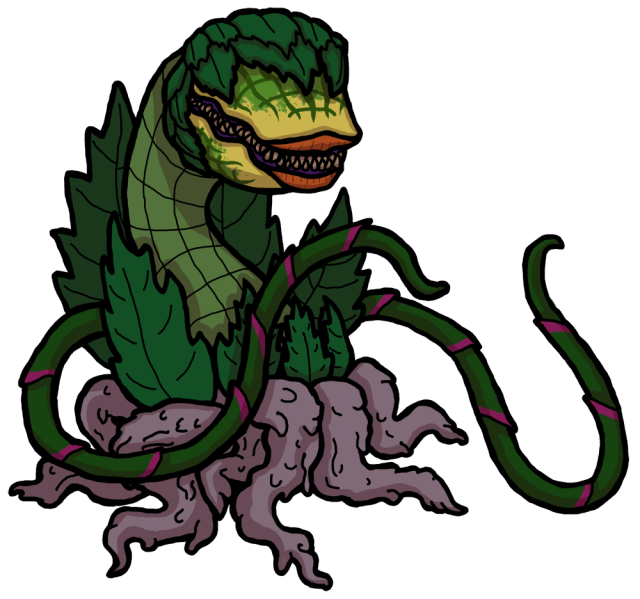 Audrey II is the monstrous star of Little Shop of Horrors, one of the few horror musicals in existence.  If you haven’t seen her (him?  Audrey II is given its name by a human before it develops the capacity for speech, and its voice is distinctly masculine, so pronouns might be tricky here – especially since Audrey II reproduces asexually) in action, then you have still almost certainly seen the countless monsters inspired by this mean green mother from outer space.  Audrey II wasn’t the first plant monster to exist, but she is by far the most famous and influential – the archetype most plant monsters follow.

Yet in many ways she’s a spin on a much older archetype.  Little Shop of Horrors is essentially a retelling of the story of Dr. Faust, where a talented person makes a deal with an otherworldly entity to gain more knowledge, power, and fame at the expense of their soul.  Audrey II is basically a science fiction take on Mephistopheles – rather than being a demon from the pits of hell, she(?) is an alien from Outer Space, albeit one just as cunning, devious, and manipulative as any devil.

The plant travels to Earth in a meek and unassuming shape as a young seedling, appearing right before young botanist/plant store errand boy Seymour Krelbourne after a total eclipse of the sun.  Seymour discovers that Audrey II draws a lot of attention, as people are almost magically drawn to fawn over this strange and unusual plant the moment they see it.  While the plant draws a lot of attention to the story Seymour works at, it also has a rather unfortunate need to consume human blood to survive – and the larger it grows, the more blood it needs.  Eventually the plant grows so big that Seymour needs to kill a human being to feed it – which Audrey II convinces him to do with a catchy song.  The body count rises higher and higher as Seymour continues to revel in fame and success, all while the plant gets bigger and bigger…

Weirdly, and perhaps a little sadly, this movie is the closest I’ve ever seen a film come to telling the Faust story in its entirety.  Out of all the devil movies we have, none really have a Mephistopheles figure that is as charming, cunning, and insidious as the folkloric take on the character – none save Audrey II here.  Few manage to show how easily and thoroughly the Faust figure is able to succumb to his own faults and descend into wickedness despite originally being a fairly decent person – except poor Seymour Krelbourne, who begins the story as a loveable underdog and ends it as a murderer who has ultimately caused the deaths of everyone he’s ever cared about in the pursuit of success.  The Faust legend is one of the most retold stories in Western culture for a reason, and Little Shop of Horrors manages to play it as straight as it possibly can despite giving it a sci-fi/Atomic Horror themed update.

Audrey II is also one of the few monsters in history who gets to win at the end of her story – although you’d either have to watch the stage show version of her story or the Director’s Cut blu-ray version of the 87 film to see that victory in action.  There are many, many monsters that have tried to conquer the world, but Audrey II is one of the few alien invaders who unquestionably manages to do so.   She doesn’t conquer man through technology or disease, but by simply playing on our desires to succeed at any cost – those secret kernels of greed and pride that lie deep in our hearts.  And she did it all while singing some truly jaunty tunes.