Posted on October 22, 2017 by tyrantisterror 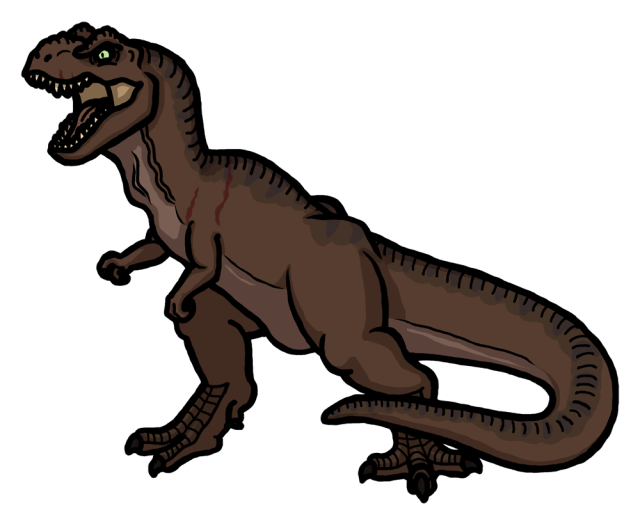 Dinosaurs have been a part of the horror genre since AT LEAST 1899, when Joseph Conrad used one for an analogy in the gothic horror novel Heart of Darkness (well ok technically it was an ichthyosaur but hush).  When they were first discovered – and when we had a LOT of misconceptions about them – they seemed like real life monsters: impossibly big, scaly (well, so we thought), and armed with all sorts of strange and terrible natural weapons.  We can be forgiven for sensationalizing them, as it was almost like discovering dragons were real.  It’s no wonder that dinosaurs were almost immediately turned into a monster archetype – one that, as time went on, was revealed to have less and less basis in reality.

In other words, dinosaurs kind of became two things: real life creatures that we would learn more and more about as time goes on, and popular monsters that we would exaggerate more and more until they barely resembled their inspiration.  On ICHF we distinguish the pop culture “dinosaurs” as a specific trope: the prehistoric monster.  We’ve also covered several of those prehistoric monsters on ICHF already – Godzilla, Rodan, Anguirus, Rhedosaurus, and, if we don’t mind stretching things a bit, King Kong, Gamera, and the Creature from the Black Lagoon.  All of these (and many more) monsters play with the idea that the prehistoric past was home to terrifying beasts of unimaginable power.  They are also all woefully scientifically inaccurate.

While the difference between real dinosaurs and prehistoric monsters was clear even in the 50′s, discoveries made in the late 80′s started to reveal that our pop culture creations were even farther from the truth than originally though.  The lumbering, eternally vicious thunder lizards were in actuality far more agile and graceful than thought – in fact, they were ultimately much more similar to birds than reptiles.

This became something of a problem for fans of prehistoric monsters.  Part of the appeal of this archetype is the belief that they actually existed – that, at one point, the world was ruled by monstrous reptiles.  While there had always been differences between the reality and the fiction of dinosaurs, those differences had been small enough to ignore up until this “heretical” revelation of avian dinosaurs.  Decades of mythology about killer lizards was crashing down – but it didn’t go without a fight.

Jurassic Park was, in many ways, a desperate attempt to reconcile the monster with the reality.  It took many of the new discoveries about dinosaurs – discoveries that others felt made dinosaurs “laughable” – and showed how terrifying they could be.  Birds might not be intimidating to most people, but they can be ruthless hunters to their (generally much smaller than human-sized) prey.  Upsize a creature with a bird’s speed, agility, and aggressive hunting tactics and voila, you have a perfectly formidable monster.

Which leads us to Rexie.

Since its discovery, the Tyrannosaurus rex was almost immediately mythologized into the most powerful monster ever to walk the earth.  Newspapers called it “the most formidable fighting animal,” “the king of all kings in the domain of animal life,“ “the absolute warlord of the earth,” and a “royal man-eater of the jungle” – all of which could just as easily be taglines for an atomic era monster movie.  If dinosaurs became monsters, then Tyrannosaurus – whose latin name contains two synonyms for “ruler” – was the king of them.

It only made sense, then, that one of the biggest monsters in Jurassic Park was the T.rex.  If the goal of the story was to show how the new reality of dinosaurs could work with the fiction of them as monsters, then it was not only smart, but goddamn necessary to show how T.rex could work with this new avian lifestyle.  If a bird T.rex could not succeed in terrorizing as well as the reptilian predecessor, then the new dinosaurs could never be monsters.

Rexie (as the book and, thus, the fandom of Jurassic Park nicknamed the beast) had big shoes to fill.  She was the heir to a royal dynasty of prehistoric monsters, carrying the literary legacy of every Gorgo, Gwangi, and Godzilla before her on her shoulders.  And, like her predecessors, she relied on her story to build a great deal of tension before her inevitable entrance – the power and ferocity of the prehistoric monster had to be built up.  Both the book and the movie versions of Jurassic Park give her a wonderful introduction – but, since I’ve watched the movie much more recently than I’ve read the book, I’m going to focus on how the film did it.

The movie allows T.rex’s pop culture reputation do the bulk of the work – sure, the paleontologists give some good lines about how big and strong a T.rex is, talking about how they don’t want to be fed and would prefer to hunt, or asking about how fast they can run, but for the most part the T.rex is simply built up by having its name mentioned and showing others react with awe.  The movie doesn’t need to spend time telling you what a T.rex is – you, the audience, know it’s a big deal.  So when the power in the park goes out and the kids are stuck by the T.rex paddock… well, you know things have gone to a dark place.

Then she arrives – the titan on two legs, her thick jaws lined with massive, sharp teeth, her eyes brimming with savage intelligence, her face sculpted into a fierce grin of predatory regality.  The real life T.rex puppet is bigger than any ever shown on the silver screen before, closer to the humans, without the fuzzy edges of rear projection or the jerky movements of stop motion to reveal her as a fraud.  She is real, she is massive, and her power is absolute.  She is the T.rex, the ultimate prehistoric monster, and with her roar the audience experiences all the awe inspiring horror they imagined in the primal world of 65 million years past.

Praise must be given to the special effects in this regard, as they allowed Jurassic Park to give us visuals that were impossible to realize with previous dinosaur movies.  The revolutionary mix of life size animatronic puppets and CGI allowed the camera to get much closer to the dinosaur than ever before, which in turn allowed the movie to give a much better sense of the creature’s scale.  A camera can only get so close to a miniature before you can tell it’s a miniature, while composite shots – especially with older technology – never quite match up.  CGI also allowed for a swiftness and fluidity of movement no other technology could match, making dinosaurs that could run, lunge, and even jump more realistically than any before them.  Rexie got the privilege of doing what no T.rex could ever do before her: she got up close and personal with her victims.

As a result, Rexie managed to take the prehistoric monster trope and make it feel fresh again.  She was faster, closer, and horrifically more intimate with her prey and, as a result, the audience, and it worked wonders.  People could no longer doubt that these avian dinosaurs were menacing – the thought of a T.rex that didn’t lumber, but rather ran after its prey like a two legged freight train was terrifying beyond belief.  The prehistoric monster was alive and well.

Yet Rexie was more than just a series of script required scares.  Jurassic Park takes some pains to show us that, despite her menace, she is still ultimately an animal, rather than a murderer.  Rexie hunts so she can eat, pursuing the largest and closest prey she can find.  Sometimes that prey is human, sometimes it’s not.  The ending of the movie even shows that, when given the choice between humans and a larger (and more distracted) velociraptor, she gladly chooses the raptor.  Like many of her prehistoric monster predecessors, Rexie is only monstrous because she is outside of her natural time – it was humanity’s choice that brought her into the modern world, not her own.  Though Rexie has a great deal of blood on her hand, she is ultimately an innocent in her own savage way.

However, while the story tries to present Rexie as a real animal, she is ultimately still a far cry from the tyrannosaurs of reality.  The differences are a bit subtle – her head is boxier, her smile more pronounced, and her teeth are larger.  One of the most important changes, though, is at her brow.  Rexie’s eyes are set beneath a pair of brows that have a vicious, almost malevolent curve to them – when combined with the natural curve of her jawline, it gives her either a furious frown or a wicked sneer, depending on the angle you see her from.  Rexie is to a tyrannosaur what the Joker is to a human – sure, the basic shape of their faces is pretty similar, but one is warped to look a good deal more menacing than the other.  The movie aimed to have as much realism as possible, but some exaggeration slipped through nonetheless – try though she might, Rexie is still a movie monster instead of a real creature.

Jurassic Park was incredibly successful and influential, and it was in no small part due to Rexie’s performance.  Her roar has been used in countless television shows, her likeness has been copied by countless artists who apparently can’t find any other reference material for a T.rex (particularly the stock art for this toy Papo made based off of her, which has been copied by Axe Cop, Tragedy Series, a collection of crappy dinosaur documentaries, Greg Land, and many others), and her scenes have been mimicked and mocked by countless parodies.  Though some balked at the idea, Rexie proved that one could inject some modern science into the prehistoric monster and still have a powerful force for terror – and, in the process, she became as renowned as all the prehistoric monsters before her.

Sadly, time – and science – march on, and Rexie, like her predecessors, has been proven to be out of date with the reality of dinosaurs.  In time a new heir to the prehistoric monster throne may have to rise – one that will probably have a lot more feathers.  But for now she still reigns supreme as Tyrannosaurus rex, the absolute warlord of the earth and true tyrant of the prehistoric world.  Long may she reign.

1 Response to ICHF: Rexie, the Queen of Jurassic Park