Posted on October 19, 2017 by tyrantisterror 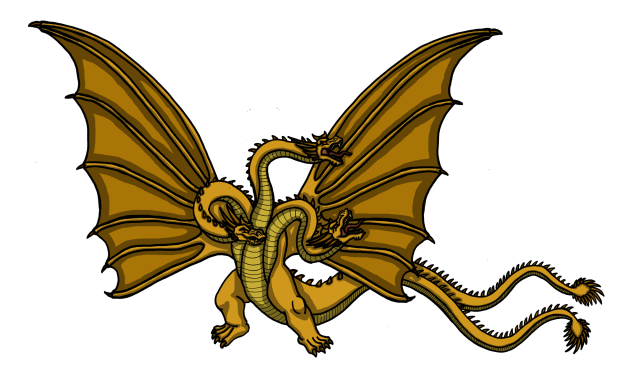 Today’s ICHF is perhaps the most dastardly, fiendish monster in Godzilla’s pantheon of giant monsters: King Ghidorah, the planet destroying King of Terror! Introduced in Ghidorah the Three-Headed Monster, King Ghidorah is notable for a variety of reasons, many of which began with his debut film. First, while Ghidorah the Three-Headed Monster is technically a sequel to Godzilla, it is one of the very few that does not feature Godzilla’s name in the title. No, only King Ghidorah gets billed this time around, showing the dragon’s importance: he upstaged the King of the Monsters! Second, Ghidorah the Three-Headed Monster is a big crossover event. Before this, Godzilla had two other crossovers: one with King Kong, and one with Mothra, both of whom had fairly big names. Toho decided to up the ante and have not one, not two, BUT THREE big name monsters crossover for this film: Godzilla, Mothra, AND Rodan would all join together for a big brawl. This was a big deal. One on one monster mash crossovers had happened in movies before this, often to great success. But the only time you had THREE big name monsters appear together before this happened with THE big name monsters, the ones so famous they became Halloween staples: the Universal Monsters – Frakenstein, Dracula, and the Wolf Man.

Toho was making a ballsy choice, in my opinion. Having this many monster suits in one movie required a big special effects budget, and Toho was depending on the movie to do impossibly well to justify it. For The Wolf Man, Dracula, and Frankenstein, that wasn’t such a huge deal – they were in movies made by a Hollywood studio and had been household names for decades. Godzilla might have had a similar sort of fame, but Rodan and Mothra were both relatively recent – there was no assurance that these two would make enough money on their reputation alone.

AND THEN Toho continued to up the ante by bringing in a fourth totally unknown monster, AND by giving it top billing, cutting the other more well known creations out of the title entirely? Madness! It’d be like doing a crossover between Spider-Man, Blade, and Ghost Rider, and then calling it “Morbius the Living Vampire!” and expecting it to sell.

Yet… sell it did.

In his first movie it is said that he has already destroyed one planet in our solar system (Mars or Venus, depending on which translation you’re watching), killing every living thing on it and making it utterly inhospitable. In later films Ghidorah forms alliances with vengeful aliens whose worlds are dying, wiping out civilizations for them out of a sadistic desire for death.  The Godzilla movies always state that if Godzilla will destroy the world if his anger isn’t stopped. Ghidorah has destroyed worlds. They state and show that Godzilla, Rodan, and other monsters only act out when they are hurt first. Ghidorah acts out in the extreme. They show that a monster that is loved and respected becomes a benevolent protector. Ghidorah is a malevolent, merciless sadist and murderer.

It’s never stated in the text itself, but I think it’s reasonable to assume that Ghidorah, like Godzilla, endured some horrible tragedy at the hands of the civilization of mortal creatures that lived on his home planet. His soul was corrupted by his agony and he grew monstrous, but they, unlike the humans in the Godzilla series, never learned how to coexist. So King Ghidorah destroyed them all, and in the process became more monstrous and corrupt. He flew through space to new worlds, and, still consumed by his rage, destroyed them, becoming more corrupt still. By the end Ghidorah became the very evil that created him: a weapon, a living force of thoughtless unnecessary death and destruction. King Ghidorah is the horror that made Godzilla and the horror Godzilla could become – the wicked extreme in opposition to the benevolent possibility presented by Mothra.

While I think King Ghidorah is strongest as a solo villain, like he is in his debut film, I can understand why it makes sense for him to work with alien races in the later Godzilla movies. The Invading Aliens in the Godzilla films are very similar to the Martians in The War of the Worlds: they are the dark possibly future of the human race. Each of these races – the Xiliens, the Kiilaks, the roaches from Space Hunter Nebula M, the Black Hole Simians, etc. – come from dying or dead worlds, and in each case their problems were caused by the same evil tendencies that humanity has. They polluted the environment, they over-consumed resources, and they engaged in countless violent wars. Not once did these aliens stop to think about their actions, and not once did they consider the consequences. Inevitably it got too late to fix it, and so the aliens did the only thing they could think to do: find another, better world, kills its residents, and take their resources.

This kind of evil corrupts kaiju, so it figures that a corrupt kaiju would be drawn to it. King Ghidorah, having long since lost his revulsion at cruelty and instead choosing to embody it, would leap at any opportunity to inflict his violent passions on an unsuspecting world. He has a grudge against Earth, as it is the only world he’s been too where the kaiju are benevolent enough to repel him. Why not join up with reinforcements and continue his war? It’s a dark counterpart to the character arc Godzilla has: while mankind gains Godzilla’s protection by healing his wounds, the aliens gain Ghidorah’s mercenary assistance through their shared commitment to their self-destructive vices. A civilization can devote itself to either harmony or war. If they choose harmony, they survive in beautiful peace. If they choose war, then their ultimate fate is one of a parasite that feeds off death, living on barren, hideous rocks and struggling against their very nature for every meal.

I like that Ghidorah is so glossy and pretty compared to Godzilla, Rodan, and even Mothra. The path of war and wickedness seems appealing, with shiny tanks and jets and brilliant, beautiful explosions. You can be tricked into thinking it is noble and, in some way, beautiful. When you see it in action, however, you realize it is worse than the more homely, honest path of the righteous. Ghidorah causes mass destruction with gaudy, revolting glee, his war cry being an insane, cackling laugh as his necks and tail flail with maniac glee and rain death haphazardly in every direction. There is nothing beautiful or noble in the way Ghidorah acts, no matter how pretty he may look. So too is the way of War. Nature and harmony, on the other hand, are more subdued. Sometimes the truth is homely or dull and lusterless, like Godzilla and Rodan. Sometimes it even looks a little unpleasant, like the repulsive look of Mothra’s larval form. Yet when you stick to the righteous path and follow through, it does reveal a beauty to you – like the colorful yet tasteful look of Mothra’s imago form. It may not shine as brightly as Ghidorah’s scales, but good is beautiful all the same when you give it time.

Some people try to write or interpret King Ghidorah like he’s a being out of Cosmic Horror – they make him out to be some vast, unknowable eldritch monster like Cthulhu. I can understand this to some extent: it’s born out of that Western disconnect between science fiction and fantasy. Ghidorah looks like a dragon, but we don’t think that should gel as well with giant bugs and dinosaurs as it does, so we try to relate it to a more science-fictiony sort of mythological horror – and Cosmic Horror fits that bill. But there really isn’t a mystery in King Ghidorah. He’s an apocalyptic dragon, the kind you get in countless mythologies – the Bible’s beast of the Apocalypse, Typhon from Greco Roman myth, and Orochi, the eight headed serpent of Japanese lore who actually inspired King Ghidorah. His motive is obvious: he wants to kill everything, because that’s what an apocalypse dragon does. His biology is like any other monster, and that’s because he is the same sort of being as Godzilla, Rodan, and Mothra: a nature spirit in physical, bestial form, albeit one corrupted far beyond their scope. You can merge sci-fi and fantasy in Kaiju stories, and, in the case of the Godzilla series, that’s exactly what they did from day one.