Posted on October 17, 2017 by tyrantisterror 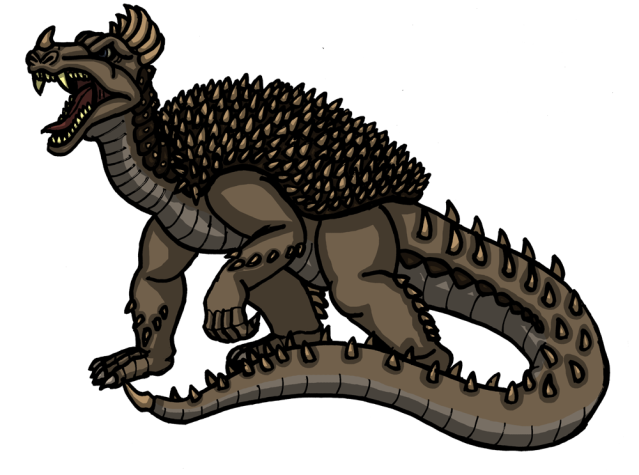 Though he’s not exactly a household name, Anguirus was Godzilla’s first monster opponent and the second kaiju made by Toho studios. His beginnings were pretty humble, to be honest. Anguirus was basically there to up the stakes – while Gojira and its contemporary creature features were content to just have ONE giant monster, Godzilla Raids Again would have TWO! Both were powerful, both were vicious, both were prehistoric, but only one was King of the Monsters, as Godzilla proved by immolating Anguirus at the end of the second act of the spiky monster’s debut film.

Anguirus and Godzilla are both really good examples of the Prehistoric Monster archetype.  Their designs cherry pick traits from various prehistoric creatures – for Godzilla, you take the basic form of T.rex, the arms of Iguanadon, and the spikes of stegosaurus; for Anguirus, you take the armored carapace of ankylosaurus, the nasal horn and crest of styracosaurus, and the tail of, I dunno, probably kentrosaurus – then add some modern animal anatomy (cat ears and alligator skin for Godzilla, a crocodile’s face and hedgehog-like spines for Anguirus), and finally exaggerate certain features of the face like the eyes and cheeks to make the creature more expressive, and VOILA! you have a bona fide movie monster! They look like something a 1950’s paleontologist would classify as a dinosaur, yet also look incredibly distinct as monsters too. They’re exaggerations of those outdated ideas with a lot of personal flair.

Still, even with his great design, Anguirus started off with very little in the way of personality. He looked cool, but he was just there to fight Godzilla, get his throat ripped out, and die in flames. That’s not really much character, is it? We-he-he-he-ellllll….

In 1968, Toho Studios had made a lot of kaiju flicks. A LOT. And most of them resided in the same universe, which was pretty unique for that time period. Most other monster movies were stand alone or, at best, had one or two sequels. Meanwhile, Godzilla is basically doing the 1960’s equivalent of the Marvel Cinematic universe, introducing some monsters in standalone films and others in sequels to monster movies whose names held more clout. Toho wanted to end things on a high note, so they decided to bring as many of their monsters as they could together into one movie: Destroy All Monsters.

Godzilla, of course, was a must have – if we continue the comparison with the Marvel Cinematic Universe, Destroy All Monsters is The Avengers, and Godzilla is Iron Man. It just wouldn’t work without him. But Toho was going all out, and they decided to mix in some lesser known but fan favorite characters amongst the big names, and one of those characters was Anguirus, who even got to have a new suit! (the original Anguirus costume was lost after Anguirus’s debut movie in a situation too complicated and stupid for me to describe at the moment)

It was Destroy All Monsters that let Anguirus shine. His new, slightly friendlier suit was part of it – Anguirus now looked less vicious and more like an adorably grumpy curmudgeon. Since his rubber suit was new, he was written into more scenes – it’s a lot easier to make a monster movie when your monster suit isn’t falling apart, after all. The new Anguirus wasn’t a rival to Godzilla anymore, but a trusted ally, fighting at Godzilla’s side through thick and thin.

His biggest moment, though, is during the final fight. Anguirus is one of the first monsters to charge into the fray, and he immediately gets his butt kicked hard. But the spikey croco-saurus doesn’t give up! He keeps fighting even when he’s being pummeled and stomped on, and soon enough Godzilla and the other monsters come to his aide. Anguirus toughs out the battle and continues fighting all the way to the end, despite taking far more abuse than any of the other monsters.

In that moment Anguirus became defined as a character. He wasn’t the strongest monster, but he could take more damage and, more importantly, would never, ever give up the good fight. Few kaiju are as courageous or loyal as Anguirus, and his tenacity made him one of Godzilla’s most trusted allies.  Anguirus would star in a few other movies as Godzilla’s go-to sidekick, fighting alongside Godzilla against opponents with metal claws, laser beams, buzzsaws built into their chest, and countless other technological horrors at their disposal. Anguirus fought them with tooth and claw, and he never, ever backed down no matter how outmatched he seemed to be.

While he isn’t the most famous monster in Toho’s roster, Anguirus is still a sterling example of the strength of their monster characters.  It’s not just main monsters like Godzilla and Rodan who developed into interesting characters – even supporting players like Anguirus grew their own unique personalities and roles, and the result of making all these wonderful monsters is a movie series unlike any other.