Posted on October 12, 2017 by tyrantisterror 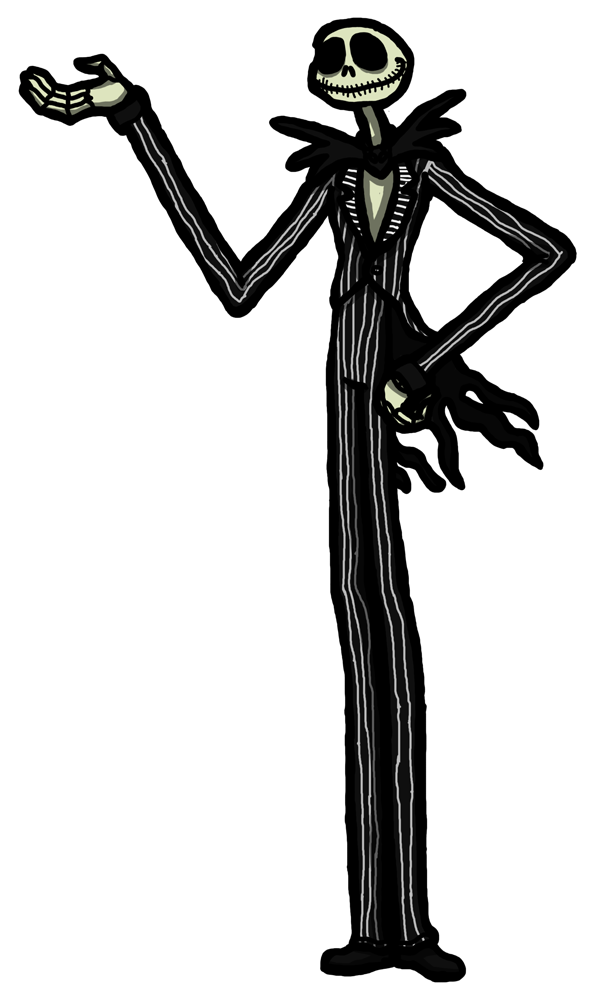 My definition for the horror genre is pretty simple: any story that aims to consistently scare the audience is horror story.  It’s broad, sure, but that really is the thing that ties all horror stories together – regardless of specific themes, tropes, archetypes, etc., they’re all stories that work because they scare us.  That’s the appeal.

So while it may seem strange to some people to count The Nightmare Before Christmas – a relatively upbeat and lighthearted cartoon – as a horror story, well, remember that it is a movie that sets out to present us a lot of scary images and scenes, even as it also invites us to sympathize with and even like the creatures that are scaring us.  Some people have this preconception that horror has to be depressing and xenophobic, but that’s not necessarily the case.  Sometimes horror invites you to love the things that frighten us, and humanizes the darkness in our lives while still keeping it dark.

So we come to Jack Skellington, Pumpkin King of Halloween, Master of Fright, and all around spooky scary skeleton.  After centuries of planning every Halloween in human history, Jack has grown bored and uninspired.   He loves what he does, of course, but it feels stale and he needs a change.  Then he stumbles upon Christmas, which is so different from Halloween that it immediately captures his imagination.  Like anyone who suddenly discovers something wonderful to fan over, Jack binges on Christmas stuff and grows incredibly obsessive.  He finally decides to make his own Christmas, and everything goes off the rails from there.

Like a lot of horror stories, The Nightmare Before Christmas feeds off of the juxtaposition of creepy imagery mixing with things that are mundane or even pleasant (that juxtaposition is actually one of the definitions for the word “horror,” by the way – but we’ll save that for another discussion).  However, instead of identifying with the “normal” side, The Nightmare Before Christmas asks you to identify with the spooky monsters instead.  Like any good monster, Jack leaves a trail of terrifying chaos and mayhem in his wake when he pursues his goal.  Yet the story also shows us that Jack actually means well – he loves Christmas and desperately wants to bring people joy instead of terror.  It’s just that joy and terror are, y’know, kind of synonymous to a living skeleton monster, and as a result his Christmas gifts aren’t quite what people would call “not fucking horrifying.”

So we get this lovely juxtaposition of the creepy and the normal, all while feeling bad for the poor monster who just doesn’t see what he’s doing until it’s too late.  It provides a lot of good scares and terrifying imagery in a very safe way for the audience.  We’re allowed to indulge our inner urge to cause mayhem and chaos, much as we are when we watch monsters like Jason Voorhees – but unlike other monsters, there’s nothing truly malevolent about Jack or his “rampage.”  We aren’t left feeling guilt for indulging in an immoral pleasure, but rather pity for the fact that sometimes we fuck things up royal when we have the best intentions.  The Nightmare Before Christmas is one of my favorite types of horror stories: the kind that shows you the monsters aren’t as monstrous as they seem, that the dark isn’t necessarily evil, and that understanding and forgiveness can be just as effective at dealing with problems as violence.

I’d also like to note something that’s… probably not intentional at all, but still pretty cool.  I’ve mentioned before how the fear of death is one of the strongest fears there is – it, combined with xenophobia (fear of what is different) is at the heart of every horror story every written.  Well, isn’t it neat then that the king of Halloween – the scariest monster in a town dedicated to creating a yearly celebration of the very idea of being scared – is a skeleton, i.e. the universal symbol for death?  He’s even the most barebones, child understandable version of a skeleton you could imagine – as a kid to draw a skeleton and they’d probably come up with something like Jack.  He is that deep, primal fear personified – why wouldn’t he be the king of the others?

And how comforting, then, is it for the audience of this story to discover that he and all his spooks mean well?  Sure, they scare us – it’s their job – but they’re not mean.  They want to show us the joy in being scared, and there is joy to it in some extent.  Pure, undiluted fear can excite the soul, and by facing that fear we can understand the things that inspire it – and by understanding them, we make ourselves stronger and better.

So this Halloween, tip your hat to skeleton Jack and his monstrous menageries of spooky friends.  The ghosts and goblins are out tonight, and isn’t it wonderful that they are?

This entry was posted in Creepy Columns, Gothic Horror Characters, Iconic Characters of Horror Fiction and tagged Jack Skellington, The Nightmare Before Christmas. Bookmark the permalink.