Posted on October 4, 2017 by tyrantisterror 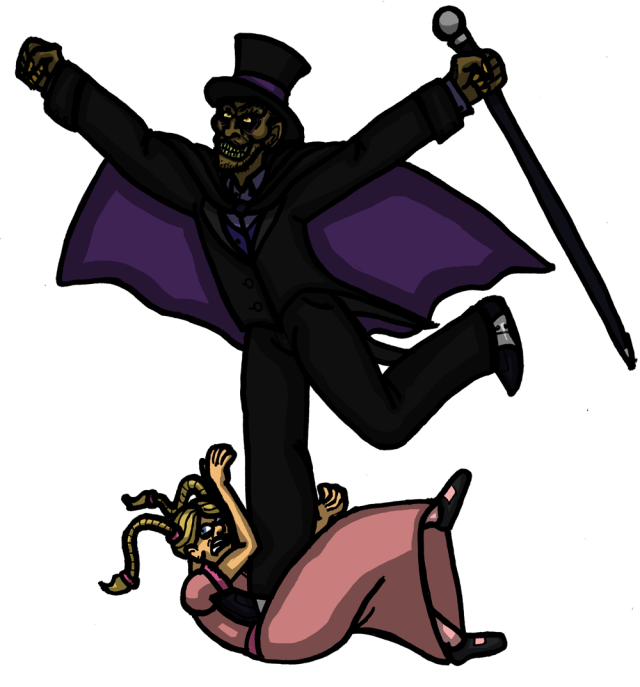 Some horror scholars (Steven King among them) believe there is sort of an unholy trinity of classic horror novels – the three big names that have had the most influence.  These three include Frankenstein, Dracula, and Robert Louis Stevenson’s The Strange Case of Dr. Jekyll and Mr. Hyde.  He has a fair point, and for a while Mr. Hyde was INCREDIBLY popular.  He had a successful and wildly popular play, people claimed Jack the Ripper was a “real life Mr. Hyde” in newspapers, he had one of the first talking horror movies AND a remake within a decade or so of it, he appeared in Looney Tunes shorts, and he even had a crossover with Abott and Costello all by himself – while Frankenstein’s Monster had to bring in the Wolf Man and Dracula to pull that off!  His popularity seems to have waned though, even more so than the other classic monsters.  You don’t see people bring up Mr. Hyde as often as they should.

Which is a damn shame, because he’s massively fun.  Dracula may be charismatic, Frankenstein’s monster may be tortured and tragic, but neither of them has the wickedly petty and audaciously mean spirited nature of Mr. Hyde.  He’s introduced in the book by trampling a little girl for no discernable reason.  Seriously, he’s just walking, spots a little girl, and thinks, “Yeah, let’s step on her face.”  And so he does.  Count Dracula wouldn’t do that – it’s a kind of evil that’s beneath him.  But nothing is beneath Mr. Hyde.  Dracula is the kind of evil that plots and schemes and does everything in a very concentrated manner.  Hyde is the kind of evil that breaks things on a whim because it’s funny.  Dracula is a supervillain.  Hyde is an internet troll.

I think Hyde’s special branch of horror is just how relatable his evil is.  We all have those destructive impulses from one time or another – moments where we want to throw caution to the wind and just wreck something.  They’re not necessarily big scale evil moments – maybe you just want to smash your keyboard, or take all the eggs out of your fridge and chuck them at a wall to see them splatter, or take out a knife and stab that stupid fucker who JUST WON’T MAKE UP THEIR DAMN MINDS AT MCDONALDS, I MEAN WHAT IS THE HOLD UP JUST BUY A FUCKING HAMBURGER ALREADY!  You know, understandable things.  You might even do them sometimes.  They’re those id impulses – the “it seemed like a good idea at the time” actions that actually seemed like a horrible idea at all times but you thought they would be fun and you could escape the consequences so you did it anyway.  Every one of us has a Mr. Hyde inside, whispering dark ideas in our ears, and the terror of him is that sometimes we let him out.

I really hate how people treat Dr. Jekyll and Mr. Hyde like they’re opposites – specifically the idea that Dr. Jekyll is the “good” half.  Mr. Hyde is pure evil, certainly, but that DOES NOT mean Dr. Jekyll is pure good.  The novel is actually very, very clear on this fact.  Dr. Jekyll explains that while the point of his experiment was to separate both halves, making a Pure Evil AND Pure Good version of himself, only the evil half came out.  Good remained within Jekyll, refusing to separate, while Evil stepped out and made a new identity for itself.

Why did Good stay?  Well, because separating the two halves was not a good idea.  That is also why Evil came out, by the by – separating the two halves was an evil, or at least bad, idea.  It’s a bold statement for the novel to make: we need evil as much as we need good.  We need that Mr. Hyde inside us, whispering his evil thoughts and desires in our ear, to survive.  We don’t need to act on his demands, of course – at least not all the time – but we need him all the same to be whole.  It’s an especially bold statement to make in the Victorian era when this book was published, where the idea of being “Pure” was so important that people were pretty much going crazy just trying to live up to society’s expectations.

I think a lot of people who adapt this story sympathize too much with Dr. Jekyll.  They think his heart was in the right place, and that separating into Pure Good and Pure Evil halves would be the best thing ever.  Wouldn’t it be better to remove that conflict?  Well, no.  No it wouldn’t.  Conflict, painful though it may be, provides growth.  It makes you stronger.  Without it, we stagnate, dwindle, and eventually decay into nothing – much like Mr. Hyde himself.

Keep your Mr. Hydes.  Let them prattle in your ear and fill your mind with dark thoughts from some time.  Indulge them a little from time to time if you wish – nothing big, of course, but just enough to keep them satisfied.  You’ll be a stronger person for it.