Posted on October 2, 2017 by tyrantisterror 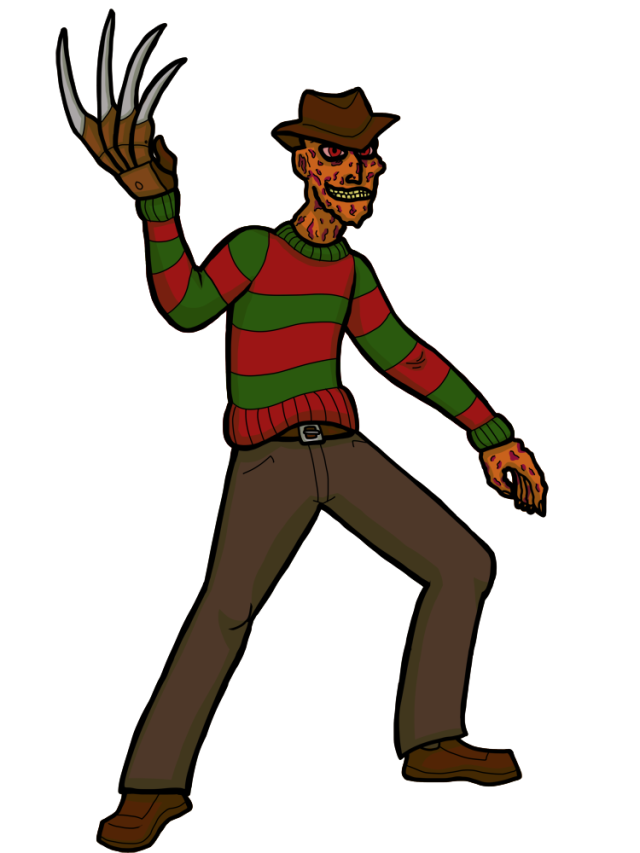 One would be hard pressed to think of a horror movie villain more dastardly than Freddy Krueger.  While the Horror genre has produced all manner of cruel and wicked antagonists in its long history, few are as downright sadistic and unfettered as Wes Craven’s iconic Springwood Slasher.  Yet despite his grisly nature, Freddy is also an oddly beloved villain – one who can be charming, or at least darkly humorous, even while doing some of the worst things you can imagine.

Freddy Krueger taps into a rather primordial fear, as he’s a villain who specifically preys upon the young.  While the constraints of the Slasher genre make the bulk of his victims teenagers, Freddy was originally a child murderer, and his focus only extended to the adolescent crowd post mortem.  Even when stalking teenagers, Freddy creepily calls his victims “my children,” giving his predation a distinctly pedophilic vibe.  While the series never explicitly labeled Freddy as a child molester (until the remake anyway), it was always very strongly hinted at in the subtext, and the one thing we know for sure is that Freddy is a killer who specifically targets young, inexperienced people who make comparatively easier prey.

That on its own is enough to make Freddy pretty damn terrifying, but our slasher is just getting started.  In classic horror style, Freddy Krueger only becomes more powerful in death, as he begins haunting the dreams of the youth in Springwood.  As the protagonists of the A Nightmare on Elm Street films quickly discover, Freddy Krueger not only appears in his victim’s dreams, but can actually kill them there as well.  The title of our series proves to be astoundingly literal, as Freddy uses the world of dreams to deal increasingly surreal and horrific deaths to his unfortunate victims.  Those in the waking world can only watch as the wounds inflicted upon his victim in the dreamscape appear in reality without any apparent cause – which is particularly gruesome in certain cases, including one iconic scene where a boy is sucked into his bed and regurgitated as a fountain of blood.

Freddy Krueger is in many ways the kind of boogeyman all children make up and fear when they’re young.  He’s a monster that preys specifically on the young and vulnerable, and one whose hunting hours occur at night, when we’re at our weakest.  He is a living nightmare, and one that you don’t wake up from.  Being so utterly despicable in motive and terrifyingly powerful as a threat, it’s not surprising that Freddy quickly became an iconic figure in the genre.

What is surprising, though, is how damn beloved he became.  Perhaps it was the surreal quality of his killing methods, or maybe it was the slasher’s own grim sense of humor, or maybe it was just the undeniable charm of Robert Englund, the actor who portrayed him in most of his movies, but somehow Freddy Krueger became, well, charming.  Like most popular slashers, many fans can’t help but like Freddy a bit, even rooting for him as he preys on (increasingly unlikable) teenagers in movie after movie.

Freddy’s murders became more bizarre and humorous as time went on, perhaps in reaction to the increasing amount of affection he gained from fans.  By the time he fought Jason Voorhees in their crossover film, Freddy had gone from a terrifying child killer to a sort of evil Bugs Bunny, even killing one victim by smoking weed with him in the shape of a giant caterpillar.  It’s one of the more odd character evolutions in the history of the Horror genre.

Like other Horror villains, I think the reason for Freddy’s odd character evolution is a byproduct of the limits of our modern horror story formulas.  In a Horror film series, protagonists tend to last one movie and one movie only – if they return for the second, they’ll generally be killed off so as to establish that the stakes are higher this time around.  As a result, the only character who remains constant, and thus has room to grow, is the villain.  Freddy, for all his faults, is the star of the A Nightmare on Elm Street franchise, and he was ultimately the element that drew people back to the theater.  As unrepentantly evil as he was, Freddy had to become something likable to keep going – and thus he evolved from one of the most horrific characters in the genre to a goofy, funny, but oddly still irredeemable comedian of mayhem.

This is one of the reasons some people find it hard to like the horror genre, and yet it’s also one of the things that makes the genre truly unique (for better or for worst).  In the real world, there should be no way for a person to like a child-murdering serial killer.  Yet in horror fiction one can become a weirdly charming icon.  Freddy Krueger is the worst humanity has to offer – and it says something about us, perhaps good, perhaps bad, perhaps both, that we can find a way to like him anyway.