Posted on October 1, 2017 by tyrantisterror 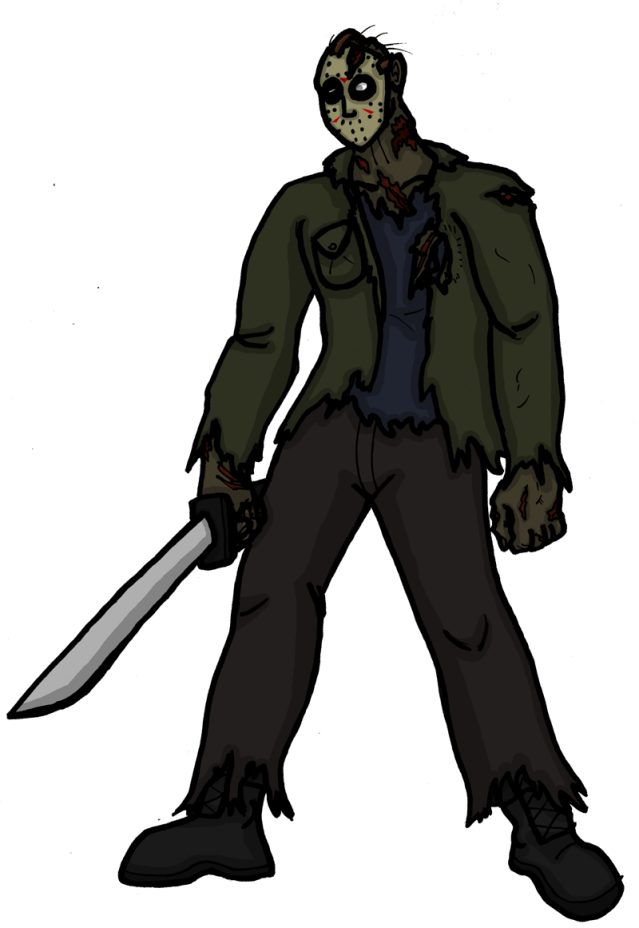 The subject of today’s ICHF is one of my all-time favorite Horror icons, as well as one of the greatest sources of my own personal cognitive dissonance.  Yes, we’re looking at one of the most notorious cinematic slashers of all time, who cut his way through dozens of human beings in sequel after misanthropic sequel.  It’s time to talk about Jason Voorhees, my problematic fave.

It’s strangely appropriate that the greatest sinner in the Friday the 13th series is also one of its few sympathetic characters.  Jason Voorhees begins his story as special needs child who drowns because of the negligence of his camp counselors and the cruelty of his fellow children.  Everyone around him – young and old alike – is responsible for his death, making Jason a victim of the malice inherent to human nature.  His mother goes on a rampage in the first movie to avenge the poor kid (Jason himself doesn’t appear in the first movie except in a dream sequence).  In the second film we find out that a wild man lives in the woods near the camp who resembles Jason – one who, according to urban legend, may actually be the little kid who drowned all those years ago, though how he survived remains unknown.  The rumors turn out to be true, and the now adult Jason Voorhees has become a vengeful murderer after seeing his mother get killed in the first movie.  He commits massacre after massacre in the camp, surviving surely fatal wounds and eventually rising from the grave on more than one occasion.  When the victimized child became a supernatural killing machine is somewhat unclear, but the fact remains that humanity turned an innocent boy into a literal monster.

People have often said that they root for Jason in these movies, and I think you’re supposed to.  With one or two rare exceptions per movie, Jason’s supporting cast varies from “self centered and negligent to a near criminal level” to “downright evil.” His victims are almost invariably nasty people who are practically defined by their character flaws: narrow minded, selfish, stubborn, cruel, petty, bigoted, etc.  Though few of them are murderers like Jason, they’re rarely pleasant – theirs is a more petty, every day kind of evil, the sort that wouldn’t intentionally drown a child but would choose to do nothing as a child drowns nearby them.  They are the worst aspects of our species personified, and it is a cathartic pleasure to see them finally fall to the same horrors they’ve ignorantly inflicted on the sensitive people they trample over – people just like that little boy named Jason Voorhees.

Every person has a moment where they feel like the human race is basically shit, and Jason Voorhees lets us revel in that feeling for a couple of hours.  Your most wicked, spiteful feelings can be vented just by watching this hulking brute kill his tormentors – and kill them in ways that are just as brutal and nasty and cartoonishly over the top as the little Mr. Hyde in your head wants them to be.

Stories don’t always have to be about the way things should be, or even the way things are.  Sometimes we need them to be about the way things we want them to be, even if it’s the kind of want that’s only fun when you ignore the obvious consequences.  We don’t want to see the grieving families of the victims, or the psychological trauma that the girl (it’s almost always a girl) who slays (well, temporarily incapacitates) the monster will suffer as she recovers from her horrifying ordeal over the course of the rest of her life.  We just want to see some assholes die for being assholes at the hands of a murder monster.  You need that sometimes.  Everyone needs a release, and a slasher film like Friday the 13th is a good way to get that release without doing anything that’s actually harmful to other people.  People who don’t have outlets like this become Jason Voorhees in real life – and a real Jason is nowhere near as charismatic as our hockey mask wearing murder man.

Slasher movies tend to downplay the supernatural element of horror, often cutting it entirely.  The horror fans who love monsters tend to avoid movies from this genre as a result, because man, why would you have a story without a monster when you could have a story with a monster?  (It sounds like I mocking that mindset, but I’m not – that’s actually how I think too.)  Likewise, fans of the Slasher genre sometimes avoid other horror movies because they think a “realistic” threat is scarier, because obviously having a guy who murders dozens of people in one night in a variety of preposterous, over the top methods is “realistic” so long as that person is an ordinary human being with no special powers.  (It sounds like I’m mocking that mindset because I am.)  It’s also obvious that a normal human being poses a more terrifying and dangerous threat than a creature with acid for blood that will lay eggs in your stomach.  Yes.

So horror fans often split on what they want Jason, and thus Friday the 13th itself, to be.  Some prefer Jason as a mortal, human, non-super powered killer who lives in the woods, because modern culture conditions us to believe that “realistic” is synonymous with “good” when it comes to writing.  Others prefer him to be explicitly supernatural – and undead, corporeal spirit of vengeance that kills until its current body is damaged beyond quick repair, only to rise again when it gathers more strength (and victims).  That is basically what Jason is by the end of the series – a ghost with a physical form that exists to kill anyone who enters its haunted camp grounds, doomed to forever seek vengeance without hope of passing on.  Whichever Jason people prefer, they always want him to keep killing tons of people in ludicrous ways, and, apologies to you “realism” lovers, that’s something that makes A LOT more sense with Supernatural!Jason than “Realistic”!Jason.

Obviously I prefer Jason as a corporeal vengeance ghost, to the point where I even consider him to be one even in his first appearance in Friday the 13th part 2.  Jason should never just be a normal human, because we see normal humans in the series and they are so much shittier than he is.  Jason is the reverse rapture – a supernatural force that kills every awful, sinful asshole in sight and can only be avoided or stopped by the kind and innocent.  He’s a murder victim who comes back to kill the very kinds of people in society who caused his death – the punishment our awful society deserves.

Jason also started becoming a character around the same time he became undead.  We always had the backstory of him being an abused child with mental illness, but in his earliest appearances he was pretty much identical to any other faceless killer you’d find in countless slasher films.  Once he came back from the grave, though, he started getting childlike touches.  Sometimes he’d stare at thins in dull wonder, or flashback to his mother (well, that also happened in Part 2, so it didn’t come completely out of nowhere).  He’d spare the dog.  He’d even throw tantrums and roar when things got hairy.  It was cool.  I mean, he was basically just a dumber, quieter, more vicious take on the 1930’s film version of the Frankenstein monster, but it worked.  He deserves to be in the pantheon of great movie monsters.  I know some people will argue that point – “he’s just a dude!” – but seriously, he fits there.  That hockey mask is as unsettling and iconic as the Phantom’s skull face or Dracula’s teeth.  Add in the decaying flesh of his later, more ghoulish incarnations and he is a bona fide movie monster.  That’s the Jason I love to watch, and you might just love him too.