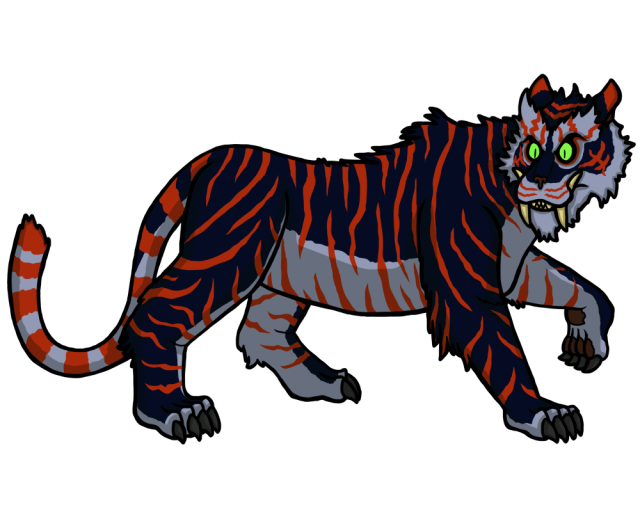 Aliases: The Queen of All Man Eaters

Place of Origin: The Glacier Oasis

Biology: Chowgarh Khan is believed to be a descendant of the sabre toothed tiger, though it is possible her long fangs evolved independently of the ice age apex predator.  Unlike her possible ancestors, Chowgarh Khan sports a second pair of fangs on her lower jaw, which has led some to dub her a “Sabre Tusk Tiger.”  The exact purpose of these fangs is currently unknown, as their outwardly curving shape makes them fairly useless for killing prey.  Some have theorized they were used for combat with other sabre tusk tigers, though at the moment there is no evidence this is the case.

Personality: Like modern tigers, Chowgarh Khan is a solitary creature by nature, and is particularly intolerant of other predatory creatures.  If another carnivore enters her territory, the massive feline will be quick to drive it off or, failing that, kill it.  She is somewhat more accepting of herbivorous creatures, though every now and then her predatory inclinations kick in and a fight ensues.

Her relationship with humanity is, in a word,”mixed.”  While she views human beings as too small to consider prey, the cat does occasionally view them as fun to chase, much as a housecat would chase a fly.  Her siege of Moscow is particularly notorious, earning her comparisons to famous man-eating tigers from the past – her name, “Chowgarh Khan,” was made in reference to a particularly notorious pair of man-eating tigers from India.  Despite this, there are no recorded instances of Chowgarh actually eating human beings, and the feline normally only attacks human settlements in retaliation for their own preemptive efforts to destroy her.

Chowgarh Khan is an ambush hunter, and generally uses the element of surprise to get an advantage over her prey.  Despite this “cowardly” approach, she is a tough fighter in her own right, packing prodigious strength in her feline frame as well as a strong bite and large, wicked claws.  She also rarely backs down from a fight, and is one of the fiercest monsters to be kept in the Siberian Monster Zone – a title that is hard to win.

When not defending her territory or terrorizing other monsters, Chowgarh Khan can actually be rather adorable.  The massive tiger is particularly fond of swimming, and has been observed spending hours upon hours playing in the Siberian Monster Zone’s various lakes.  If spotted, the cat immediately leaves the water and slinks off in a foul mood, almost as if embarrassed to be seen enjoying herself.

This entry was posted in ATOM Kaiju Files, Monster Menageries and tagged Kaiju. Bookmark the permalink.