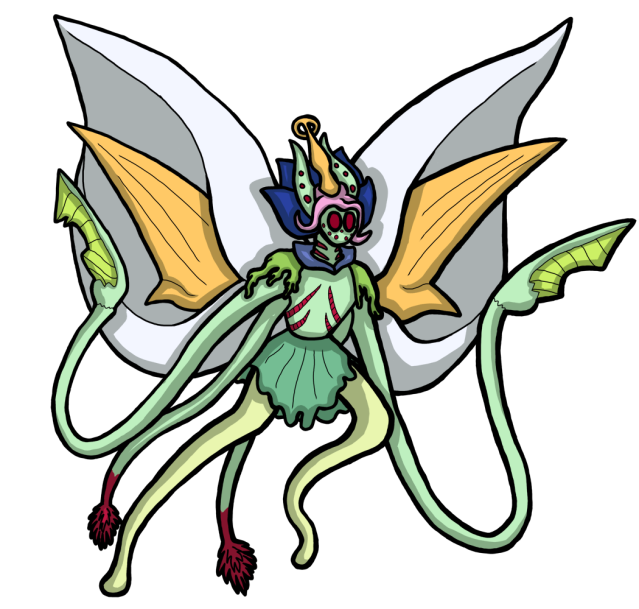 Trifitan Arum was created by Cstalli for the ATOM Create a Kaiju Contest.  Cstalli retains all the rights to Trifitan Arum, and the illustration and profile here are adapted from his work.  While Trifitan Arum is not an official part of ATOM’s canon, it and the other contest entries posted on this site are considered semi-canonical – the Star Wars Legends to ATOM’s Star Wars.  Cstalli’s tumblr is filled with more beautiful art and character designs, so give it a look!

Aliases: The Glowing Lilies, The Flower Fairies, The Angels of Bloomington

Notable Stomping Grounds: Too many to count – Trifitan Arum populations could be found on most continents during the Atomic Time of Monsters, and gardens filled with the flower fairies can be found on every kaiju sanctuary.

Biology: Created when a large amount of Yamaneon radiation leaked into a large botanical garden through unknown means, the Trifitan Arum are made up of a massive hodgepodge of plant DNA. Most recognizable are lilies, thistles, cacti, poison ivy, violets, and the famous titan arum. The Trifitan’s massive body is made up of a complex system of vines, allowing it to move and transfer water, nutrients, and toxins throughout its body. There appear to be cacti-like ribs in the torso, while the head and appendages are entirely filled with complex mobility vines. The fairies’ limbs, most notably their whip-fingers and upper razor-leaf appendages are able to stretch and compress, allowing them incredible reach and range for their attacks. They fly through currently unknown means, but scientists believe the strange properties of their pollen* have given them the power of flight.

The Trifitan, like most plants, need regular access to sunlight and water, but seem to need very little nutrients from the soil. Water and sunlight, on the other hand, are incredibly important; they can most often be seen standing motionless in pools, ponds, lakes, or the sea, absorbing water and the sun’s rays. A Trifitan will become immobilized within hours of losing access to the sun or adequate water, and die days later. Its entire pale body is capable of absorbing sunlight,

Their bodies give off an incredible bio-luminescent glow, strong enough to be seen even in harsh sunlight. The combination of their light and their kaiju-pollen create an explosion of plant life wherever they go. Scientists are currently trying to reverse engineer this reaction to help cities recover from droughts, and to make deserts more habitable for human life. The sap or ‘blood’ of a Trifitan holds a powerful neurotoxin, which is usually pumped into their spines and bladed leaves, but can also penetrate thick skin if the Arum were to bleed on an enemy. Their bodies, while limber and flexible, are also frail, making them particularly easy to kill.  Being plants, they have an extreme weakness to fire, dry/cloudy climates, and the cold.

Like all kaiju, the Trifitan Arum have an impressive array of abilities:

Personality: The Trifitan Arum, through unknown means, seem to have established a hive mind, with no true individual behaviors or any leader. Scientists have theorized that their pollen floats around the earth, allowing them to all understand and respond to one another, and call others to their aid. They typically patrol a large stretch of land, a few hundred miles in diameter, helping the local plants to grow, stopping to sunbathe, soak up water, and occasionally shove their legs into fertile soil for extra nutrients in times of struggle.

They have been dubbed “Angels” by many people for both their appearance and their apparent decision to guard the natural world. The massive collective will do their best to stop mass plant death, be it a wildfire, deforestation, excessive farming, or even particularly destructive kaiju fights.

While they have no qualms in attacking kaiju or humans, the Trifitan are hardly a threat when fought alone; their power lies in their incredible numbers and ability to assemble. When not fighting or responding to a distress call, they have been seen interacting with other kaiju with anxious curiosity, generally from afar.