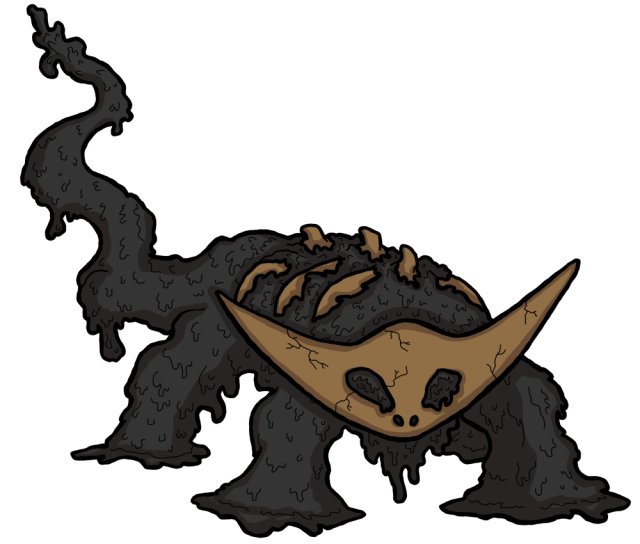 Index was created by polygonfighter for the ATOM Create a Kaiju Contest.  Polygonfighter retains all the rights to Index, and the illustration and profile here are adapted from their work.  While Index is not an official part of ATOM’s canon, it and the other contest entries posted on this site are considered semi-canonical – the Star Wars Legends to ATOM’s Star Wars.   Polygonfighter also creates quite a few monsters on their blog, including more than a few other kaiju, so check them out!

Aliases–  The Tar Ghoul, The Living Fossil, Mistake from the Tar Pits, The Oozing Phantom

Height: 75 feet at the arch of its back

Biology: Another oddity in the already odd world of kaiju, Index appears to be a mass of micro-organisms that have preserved the skeletal remains of  prehistoric amphibian kaiju.  Only the intervention of these organisms has kept the bones themselves from decaying into Yamaneon crystals, though how they do this is unknown – by all accounts, Index should not only be dead, but its shambling corpse should be nothing but an inert collection of minerals.  Whether Index even counts as an actual kaiju is a matter of scientific debate – while it pulses with Yamaneon radiation and has traces of Yamamneon in both its preserved bones and the micro-organisms swirling around in its tar, it is nonetheless incredibly atypical for a giant monster.

Most notably, Index is apparently impossible to kill (if it is even alive to begin with).  Fallen pieces of the tar monster will eventually rejoin the whole, and it is able to endure most attacks.  Notably, one battle that seemed to be fatal for the monster – which involved the entirety of its oily “flesh” being burnt away – resulted in its bones lying inert for a few weeks.  While eventually they started to undergo proper Yamaneon decay, they stopped halfway as a strange fluid spilled out of the eye sockets of Index’s skull, pooling around the skeleton until new tar seeped from the rest of its bones.  Within hours Index was back to its former self.

Index’s power set is a nonstandard as well:

Personality: Ominous and forebodding, the sight of index terrifies most kaiju despite the ghastly creature’s lack of firepower.  Humans aren’t entirely sure of what to make of it either – while Index does have a habit of attacking oil refineries to replenish its body, the monster otherwise pays humanity little mind and is easy to live with so long as its hunger is sated.

Despite its peaceful nature, Index is deeply unnerving.  It has a tendency to collect the corpses of other kaiju, and its original lair in The Pit was littered with clusters of Yamaneon crystals that once were other giant monsters.  Some particularly superstitious people consider Index an agent of death itself – a sort of kaiju grim reaper.

Index is a surprisingly poor fighter despite its fearsome reputation, relying on its unique powers to escape the blows of its fellow monsters since its own body doesn’t actually hit particularly hard.  Most creatures that try to fight the undead amphibian give up shortly into the fray as it clearly becomes impossible to get a good hit in – only the most homicidally determined monster can actually convince Index to put up a true fight.

While Index is fairly peaceful as far as kaiju go, it was eventually relocated to Echidna Island.  Unlike other residents of this kaiju sanctuary, Index wasn’t put there to correct its behavior, but rather to keep the other kaiju in the sanctuary in line.  Since most of the vicious residents of Echidna Island are actually terrified of the ominous skeletal kaiju, Index has proved to be a highly effective security measure.