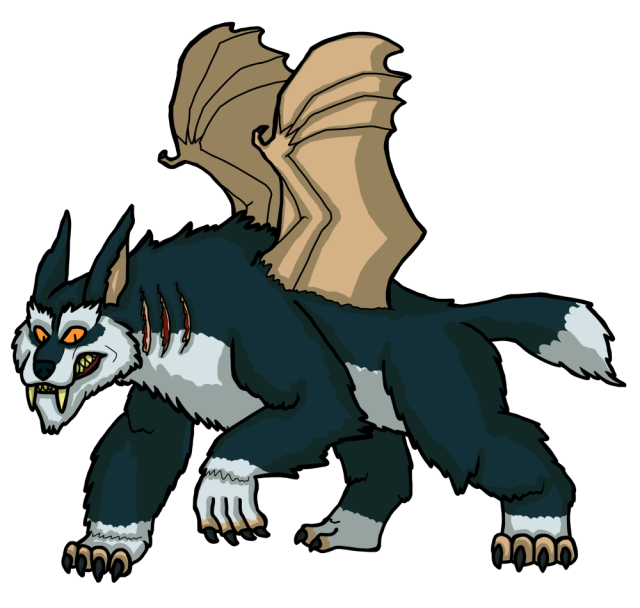 Gurt was created by I Am Fish Mage for the ATOM Create a Kaiju Contest.  I Am Fish Mage retains all the rights to Gurt, and the illustration and profile here are adapted from her work.  While Gurt is not an official part of ATOM’s canon, he and the other contest entries posted on this site are considered semi-canonical – the Star Wars Legends to ATOM’s Star Wars.  I Am Fish Mage is a marvelous artist whose deviantart gallery is chock full of excellent illustrations, so check her work out!

Place of Origin: Isle of Bones

Biology: Despite his reanimation by a strain langsuir (the “vampire virus”) and his subsequent atomic fossilization, Gurt is ultimately still a dog. He runs on all fours, growls when distressed, and wags his tail when pleased. However, langsuir is not naturally capable of infecting non-human hosts, which has resulted in certain quirks in his anatomy as the virus attempted to adjust. Gurt’s forelegs end with claws that are somewhere between human hands and canine paws.  In addition, his hips have warped, and he can actually support himself entirely on his back legs for short periods of time. This speaks nothing of his elongated canine teeth and small, bat-like wings.

However, Gurt’s most notable mutation from the Langsuir virus is his ability to change his shape.  This is usually done to reinforce different aspects of his anatomy, such as mouth erupting with enormous fangs, his paws becoming more akin to human hands (complete with thumbs) or, alternatively, bristling with massive claws. Gurt can also loosen the structure of his body, turning into an almost putty-like slime. While in this state, he can force his way through spaces far too small for most kaiju to fit through, or even open holes in his body so that foreign objects glide harmlessly through. This state also allows him to alter his anatomy even further once he returns to a wholly solid form, growing new limbs and weapons as the moment demands.

The strangest gift of Gurt’s infection is his bond with his lesser kin. Whether a quirk of his unique nature, or an unpredictable result of atomic fossilization, Gurt seems to have some kind of dominion over dogs and wolves. His kin treat him with whatever passes for deference among dogs, and when he is in distress they will come to his aide. In actuality, Gurt has no conscious control over his effect on dogs, and they instead respond to his wishes as a matter of the strengthened connection. If he was ever made aware of this power, it is impossible to predict how he would react.

Between his bizarre anatomy and even stranger abilities, Gurt is a kaiju that will puzzle humanity for years to come.

Gurt’s langsuir infection grants him several powers beyond those of the average kaiju although there is a bizarre caveat: all of his non-standard powers can only be used when not in the presence of direct sunlight.

Personality: Gurt is caught between two extreme drives: an intense desire to prey on living creatures, and an intense desire to be loyal to those he views as friends. As a victim of langsuir, particularly a non-human one, he is driven by thirst for fresh blood and a desire to dominate others. As a dog, he feels a fierce loyalty to whatever he considers his family. The result of these clashing urges is a kaiju that is unusually territorial, driven by a desire to stake his claim, and defend the people that live there.

Gurt is a little better at processing and retaining information than his kin, due to the changes in his physiology caused by his infection. He is capable of understanding some abstract concepts and is an excellent cross-kaiju communicator as a result. Of course, like many kaiju, his first instinct upon meeting another kaiju is to fight rather than communicate, but once the formalities are finished, Gurt is a popular monster.

When he does fight, Gurt is atavistic. Running on a mixture of instinct, unnatural drive, and his own limited mental capacity, he is little different from many other kaiju. However, he is not creative, despite his theoretically high adaptability, and tends to get frustrated when his initial assaults fail. He is smart enough to understand that he is a better combatant at night, and he usually tries to avoid fighting during the day, instead preferring to rest.