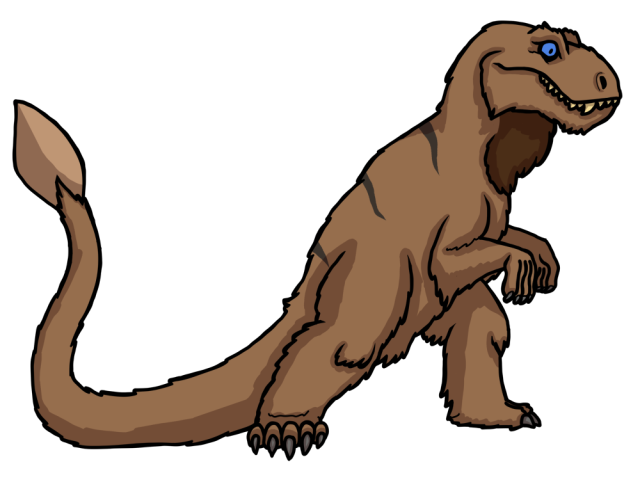 Bajingis was created by virovac for the ATOM Create a Kaiju Contest.  Virovac retains all the rights to Bajingis, and the illustration and profile here are adapted from their work.  While Bajingis is not an official part of ATOM’s canon, she and the other contest entries posted on this site are considered semi-canonical – the Star Wars Legends to ATOM’s Star Wars.  Virovac is fairly active on tumblr, so give them a look!

Biology: Almost a fitting reversal of how primitive retrosaurs gave rise to species similar in build to the synapsid pelycosaurs that preceded them, Bajingis is a synapsid with a build similar to the paleo tyrants that came long after. While her ancestors probably had a coat of hair, her sheer woolliness seems to be more of  a disorder than an actual adaptive feature, as she shows no other adaptions for a cold climate. However, her kaiju metabolism has allowed her to survive quite well in her chosen home: the recently emerged island Coldouthere.

Bajingis’s most well known aspect is her left eye socket.The eye socket is completely encrusted with yamaneon infused bone,from which she can fire a terrifying beam of green light that scorches the hides of other kaiju. Her full power set includes:

Personality: Bajingis does not make friends easily, nor does she particularly desire them. With a roar like the shrieks of a thousand tortured mice, or a hiss like a steam vent, she will bellow challenges to even the weather itself. Her friendliest actions convey the message of, “See I could hurt you, but I didn’t”, such as by gently locking her jaws with those of another kaiju.

While willing to tolerate humanity in their territory , she attacks any vehicles or built structures within her own Antarctic domain. Most peculiarly, she seems to have a strange sense of kaiju solidarity:she assumes humans are at fault in any kaiju-human conflict and will instantly side with the other kaiju present. In fact she will instantly come to the aid of any kaiju under military attack, even if normally she would consider them a prey item. This has gained her several allies among Australian kaiju, and she seems to honor this comradery. She has also made some allies through cooperative hunting, be it it herding clusters of smaller prey into traps or ganging up on another kaiju.  However bonds developed through hunting are not as strong, and she will turn on former allies if she feels they are declaring too large a share of the spoils.

A simple carnivore, humanity would find her tolerable if she stuck to her own domain. Failing that, if she was willing to work cooperatively with humans to hunt kaiju harming the Australian ecosystem, it would well be worth the loss of the occasional herd of livestock. However, the fact she will side with kaiju against humanity in any conflict has made her neutralization a top priority for the Australian government. Unless she comes to a revelation that humanity is not always in the wrong in its conflicts against kaiju, she will need to be captured or killed.