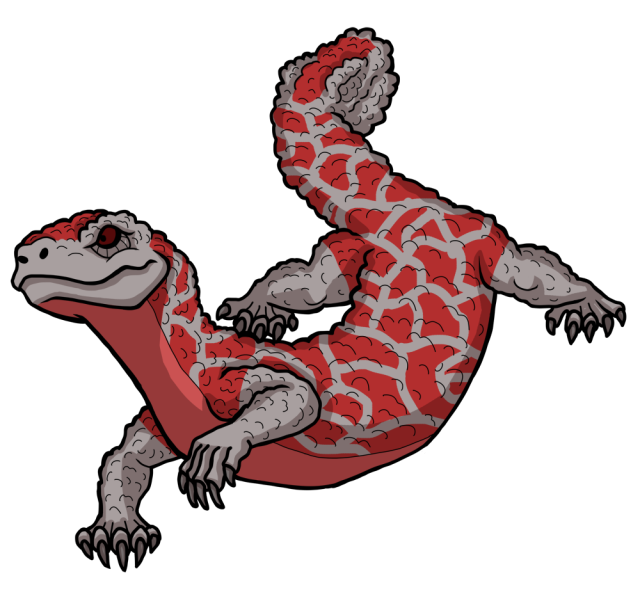 Rayken was created by godzillakiryu91 for the ATOM Create a Kaiju Contest.  Godzillakiryu91 retains all the rights to Rayken, and the illustration and profile here are adapted from their work.  While Rayken is not an official part of ATOM’s canon, it and the other contest entries posted on this site are considered semi-canonical – the Star Wars Legends to ATOM’s Star Wars.  Godzillakiryu has their own kaiju story in the works about a draconic monster named Jake, so check them out!

Biology: Turned into a kaiju by a sudden burst of Yamaneon radiation, Rayken could be described as simply a magnified gila monster, though that would be ignoring some key differences between it and the lizard it mutated from.  Its stumpy tail ends in a bloated stub that resembles its own head, and its color scheme is even flashier than is normal for the venomous lizards it calls kin.

Strangest of all, though, is Rayken’s ability to move faster than should be possible for a creature of its build, even by kaiju standards.  To put it simply, Rayken has super speed in addition to the standard kaiju powers and its gila monster venom.  Its full power set includes:

Personality: Rayken mostly prefers being left alone when it comes to other kaiju.  When others come within its territory, the giant gila monster can be observed hissing or growling in a way that is oddly reminiscent of a hot rod’s engine. If its warning isn’t heeded, Rayken will proceed to battle the other monster, stopping only when its enemy retreats or Rayken itself is knocked unconscious.

Unfortunately, Rayken finds humans to be extremely interesting for one important reason: their cars. While Rayken will leave most humans alone, it is an absolute glutton for cars, and will eat them voraciously on sight, regardless of whether or not they are occupied. No one can explain this, as cars certainly don’t have nutritional value for the giant gila monster, but no amount of training has kept the venomous lizard from repeating this bad behavior.