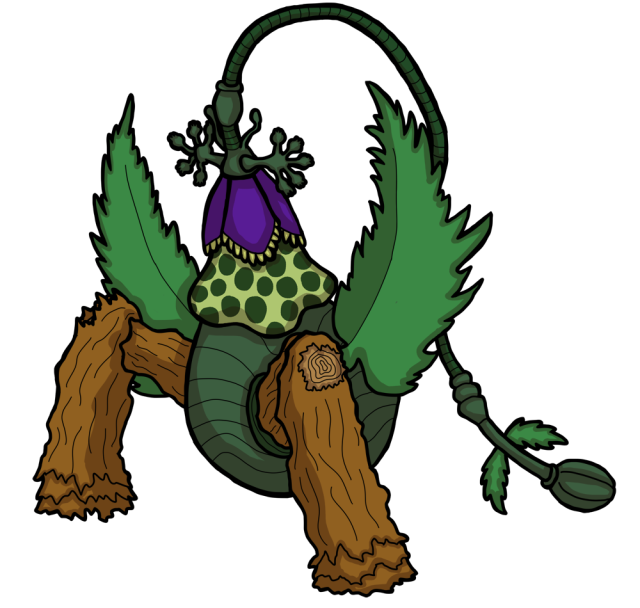 Papaver Magnus was created by Quinnred for the ATOM Create a Kaiju Contest.  Quinnred retains all the rights to Papaver Magnus, and the illustration and profile here are adapted from his work.  While Papaver Magnus is not an official part of ATOM’s canon, it and the other contest entries posted on this site are considered semi-canonical – the Star Wars Legends to ATOM’s Star Wars.  Quinnred has created many marvelous monsters which you can see on his blog, so if you love seeing creative and excellently rendered creatures, check it out!

Biology: Though kaiju plants aren’t exactly new, most are otherwise fairly normal plants in that they sit in one spot, consume nutrients, and grow.  Papaver Magnus is one of the few kaiju plants that is animate, walking on two massive roots.  Mutated from a recently discovered species of poppy, Papaver Magnus can produce gaseous vapors that either enrage nearby fauna to a rabid degree, or pacify them into slumber.  The chemical behind the latter effect has been particularly useful to kaijuologists, and many kaiju sanctuaries import or recreate the chemical to keep their inmates passive.

While most assume Papaver Magnus is simply a mindless plant, its interactions with fellow kaiju are incredibly complex, making some wonder whether the giant poppy may have some rudimentary intelligence of its own.  Papaver Magnus is more active at day, but at night it “breathes” like an animal and it’s field of influence is much larger.

Personality:  Personality is difficult to determine with such a bizarre being. It ignores nearly all terrestrial obstacles, though it seems “unnerved” in deep water as it always takes drier, shallower paths. Its mind altering substances seem to represent it’s mood: when calm, it produces a slumbering aura, while its frenzy aura is released when it is attacked or otherwise stressed.  Beyond these chemical responses, Papaver is also capable of using its floral limbs to whip and batter other monsters into submission, and can likewise be seen dodging attacks thrown at it by others.  While these “fighting moves” may merely be reflexive actions, some researchers believe Papaver’s actions are too complex not to have some thought behind them.

Papaver shows little interest in social bonding, only altering levels of ignorance. Herbivorous kaiju stress it, fire stresses it, sharp things stress it – in short, anything that would threaten the plant causes it stress, resulting on conflict.  However, when ignored by others, the plant is content to simply amble about on its carefree way.