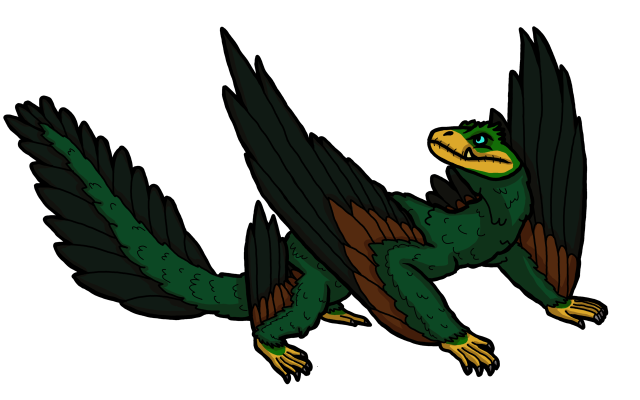 Pengku was created by theload for the ATOM Create a Kaiju Contest.  Theload retains all the rights to Pengku, and the illustration and profile here are adapted from her work.  While Pengku is not an official part of ATOM’s canon, it and the other contest entries posted on this site are considered semi-canonical – the Star Wars Legends to ATOM’s Star Wars.  Theload has an excellent blog that analyzes monsters and mythology, with a focus on dragons in particular, as well as her own story starring a dragon named Landilizandra.  If you enjoy my takes on mythology and monsters, give hers a look!

Biology: While they never became as great as their cousins, birds did manage to diversify during the Age of Retrosaurs, taking on unusual forms as they struggled to master fight. One line were curious, scurrying creatures with feathers on both their arms and legs, forming a four winged system with which they glided from tree to tree.  Apart from her size, Pengku seems to be a fairly typical member of this group. Pengku will crawl along the ground in a semi-upright quadrupedal gait, though the Kaiju will seek out heights to climb whenever possible. From these heights Pengku will launch into the air, flying in a way that is reminiscent of the gliding locomotion of her ancestors.

The sex of the Kaiju was unknown for a while, until scientists were lucky to enough to gain a blood sample. Tests then showed that the bird was a female.

Personality: Pengku is a curious creature by nature, often spending her days on a single perch, watching humans go by. While some may find this behavior concerning, the Kaiju has never attacked a person, and most of the damage cause by her is collateral damage, caused by the creature’s size alone. She has been observed, however, to attack garbage dumps. At first there seemed to be little rhyme or reason behind these attacks, but soon they began to follow a pattern, and it was discovered that Pengku had learned which locations had the most reward.

Pengku also seems to be territorial when it comes to other Kaiju, leaping to attack on sight.  Despite being small by kaiju standards, she is a ferocious fighter, using her small size and agility to fly circles around her enemies while whittling them down with a frenzy of quick attacks.  Most monsters quickly learn to leave the scrappy prehistoric bird alone, and for this reason she is valued by the citizens of China as defender against more malevolent kaiju – especially since she is also one of the least destructive kaiju known to man.

Her territoriality isn’t impenetrable, however, and there have been rare occasions where Pengku tolerates the presence of other monsters.  She never seems to actively enjoy it, though, and will chirp and screech in irritation if they get too close.  It seems Pengku would prefer the company of her own kind – a tall order considering no others have been found.