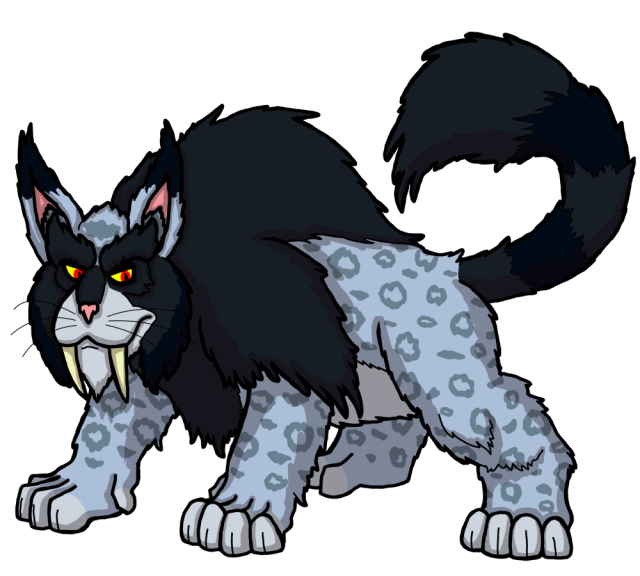 Julkath was created by SkarmorySilver for the ATOM Create a Kaiju Contest.  SkarmorySilver  retains all the rights to Julkath, and the illustration and profile here are adapted from his work.  While Julkath is not an official part of ATOM’s canon, it and the other contest entries posted on this site are considered semi-canonical – the Star Wars Legends to ATOM’s Star Wars.  SkarmorySilver has many artistic projects of his own (many of which are monster related), which you can find at his art blog here.  I highly recommend you give them a look!

Place of Origin: The Glacier Oasis

Biology: Julkath is a gigantic carnivoran, very closely related to all modern cats both wild and domesticated, although some aspects of his anatomy differ from any known modern feline. He has a barrel chest and stocky, muscular limbs rather like a bear, and flexible shoulders and hips, opposable thumbs, and dexterous paws that are oddly similar to those of primates. Though Julkath is by no means swift, he makes up for it by being both immensely strong and surprisingly acrobatic. His tail is thicker and more muscular than most cats, allowing it to be used as a prop so he can rear up on his hind legs for prolonged periods; the stability he gains from this tripodal stance, combined with his immense upper body strength, makes him excellent at grappling.

Julkath’s evolutionary origin is not certain; while his kinship to modern felids certainly can’t be denied, the unusual aspects of his anatomy may be a hint that his ancestors diverged from the lineage millions of years ago. Scientists suspect that he may have evolved from a hypothetical race of Ice Age feline predators.

Most individuals, be it people or monsters, would be forgiven for believing Julkath to be a horrifying monstrosity, and with his unnatural anatomy and hulking ferocity he certainly looks the part. In truth, the massive feline is more antisocial and jealously protective than outright savage. He is almost defined by his obsessive vigilance over his territory, and utterly refuses to leave the area unless a global threat forces him into action – anything that spells doom for the whole planet certainly spells doom for his turf and food supply as well, after all. His stubborn insistence on remaining where he is makes him far less of a threat to civilization than any giant feline has any right to be, and his solitary nature makes him much less likely to cooperate with others than most kaiju would appreciate. He’s an curmudgeonly, surly old geezer, and he apparently prefers to keep it that way.

However, observations from a safe distance may hint towards the possibility that his annoyance at basically everything may be a front to a certain extent. Despite being a well-armed colossus of fur, flesh, teeth, and claws, Julkath is still a cat at the end of the day, and far from being the majestic, rampaging terror presented by the media, he prefers to spend most of his free time doing cat things and nothing else. Eighteen hours of sleep, an hour or two of catching a couple of thirty-foot goats or boars, the remaining four or five hours playing with said goats or boars before devouring them, rinse and repeat. If anything, Julkath appears to be the kaiju equivalent of an aloof shepherd, content to keep an eye out on his livestock and simply watch the world go by. Monsters who think they can exploit this would be wise to have second thoughts, however; despite his habit of lazing around all day, it seems that Julkath is in fact keenly aware of the fragile ecological balance between him and his livestock. As such, he will not hesitate to point out that anything that dares to plunder his territory does so at their own peril – more than one bloodthirsty or otherwise malicious kaiju has attempted to slaughter the oversized herd animals for ill-gotten sustenance, only for the furious feline to piledrive them into the dirt before ripping their throats out with his fearsome saber teeth.

Julkath is a much more active combatant than his bulk suggests, able to leap and clamber about, using the terrain to his advantage and pouncing from unexpected angles. His fighting moves are actually surprisingly similar to human wrestlers, save for the inclusion of razor-sharp retractable claws and enlarged, uniquely serrated canines. If feeling especially pressured, however, he can also unleash a deafening roar that can rupture eardrums at close range.