Posted on January 19, 2017 by tyrantisterror 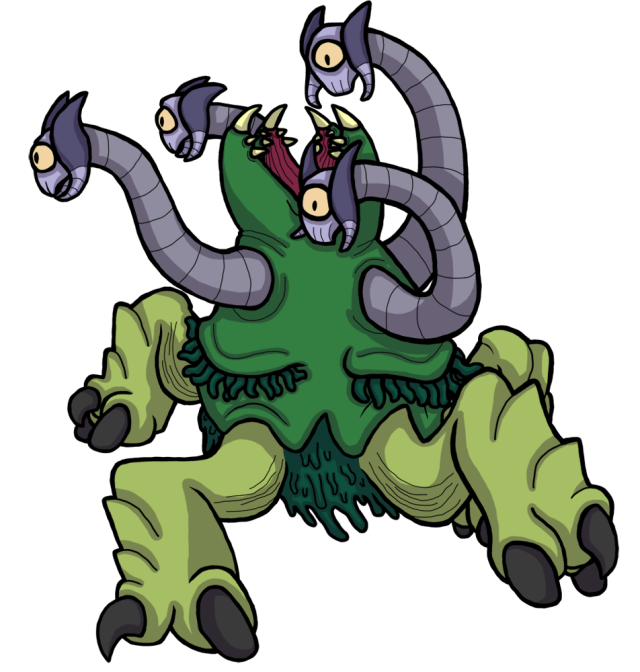 Biology: With its bizarre quadrilateral symmetry, Ugugular is surely one of the strangest monsters forced to do the Beyonder Alliance’s bidding.  Its four eyestalks double as grasping feelers, with tiny mandible-like claws that can drag prey into its gaping maw.  Ugugular’s anatomy is so wildly different from the other kaiju  in the Beyonder Alliance that it cannot be genetically modified.

Personality: Another veteran of several Beyonder Alliance skirmishes, Ugugular has learned not to question the violence its owners frequently drop it into.  The bizarre alien knows what is expected of it, and dutifully goes about rampaging and destroying everything in sight.  Unlike a free range kaiju, however, Ugugular takes no joy or satisfaction from the havoc it wreaks – by this point it rampages out of habit rather than actual rage or malice.

Ugugular is something of a pushover when it relates to other kaiju, quickly bowing to the whims of stronger and more aggressive monsters.  It has no sense of loyalty to any one authority, choosing instead to toady up to whatever monster seems to be the most powerful in a given situation.  This sycophantic behavior, like much of Ugugular’s personality, is a direct result of its anxiety over being put in so many violent situations without any true support.

When allied with another kaiju or rejected by those it tries to suck up to, Ugugular is a vicious combatant.  Its unique body layout makes it almost impossible for other kaiju to sneak up on it, and Ugugular can attack from almost any direction.  Its jaws deliver a wicked bite, its legs are devastatingly powerful, and the viscous slime oozing from its glands on the underside of its body can efficiently ensnare almost any enemy.  Worst of all, Ugugular can belch out an acidic spray that dissolves the flesh of its opponents.  While it acts weak and submissive, Ugugular is actually a fairly resilient monster.