Posted on January 11, 2017 by tyrantisterror 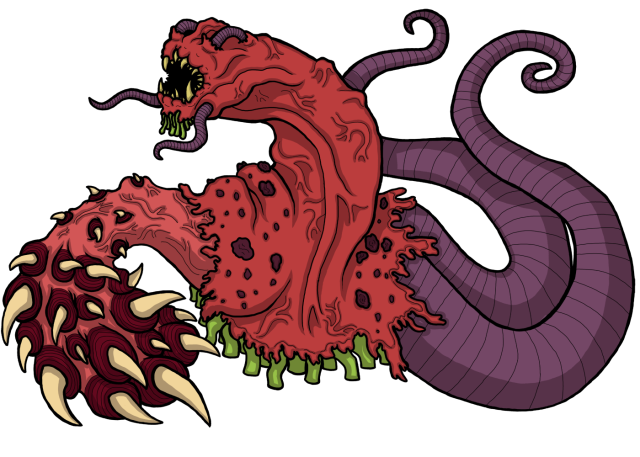 Biology: Originally, the Writhing Flesh was a collection of several different kaiju that had been corralled within the Siberian Wilderness.  These unfortunate monsters were the victims of the first and only use of nuclear weapons against kaiju, and the Writhing Flesh was the result of their attempted destruction.  While the sheer explosive force of the bomb pulped the flesh of the monsters, the amount of atomic energy released in the blast sent their regenerative abilities into overdrive, fusing the meaty remains of several different kaiju into one enormous mass of living tissue.  There has never been anything like the Writhing Flesh before in the history of the Earth, and there will hopefully never be anything like it ever again.

Despite being terrestrial in nature, the Writhing Flesh is one of the most alien kaiju in biological terms.  A hybrid of this magnitude could never arise from natural means, and in many ways it’s a miracle the Writhing Flesh exists at all.  Its organ systems are a chaotic mess, and scientists are in heated debate about nearly ever facet of its biology.

As it lacks external eyes, the Writhing Flesh is blind to the outside world.  It does have decent hearing, however, and can sense vibrations through the ground much as snakes do.

As a chimeric fusion of several animals, the Writhing Flesh boasts a varied power set:

Personality: While there is some debate on the subject, many kaiju scientists have determined that the Writhing Flesh has some degree of intelligence and emotion within its complicated and bizarre nervous system.  While it spends most of its time lying relatively still (save for the occasional twitching) and moaning, on some occasions it has been seen intentionally moving to join groups of other kaiju.  It rarely tries to complete these approaches, however, and instead will set down on the outskirts of the group.  Some believe the creature desires kinship with its fellow monsters, but has learned that its horrifying appearance prevents an actual bond from forming.  While other scientists write this off as “anthropomorphic,” many observers have noticed an undeniable melancholy air to the pathetic monstrosity.  Whatever the Flesh’s motives may be, it is a pitiable creature to be sure.

While the Writhing Flesh will fight to defend itself when attacked – and viciously at that, seeing as it is one of the largest kaiju on the planet – it is never the aggressor itself, and is far more inclined to let its fellow monsters go about their business when given the chance.

This entry was posted in ATOM Kaiju Files, Monster Menageries and tagged Atomic Time of Monsters, Kaiju, The Writhing Flesh. Bookmark the permalink.