Posted on December 31, 2016 by tyrantisterror 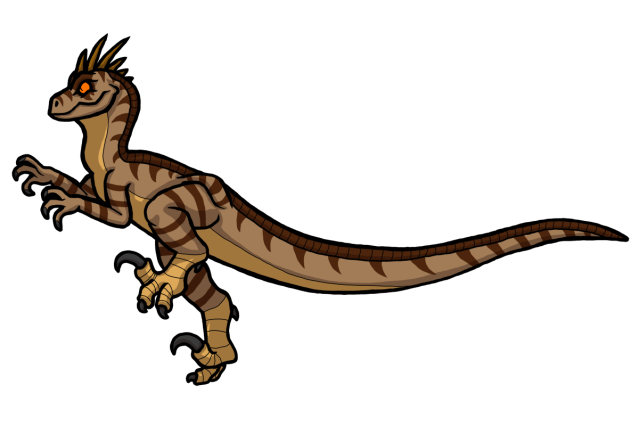 Biology: One of the faster kaiju alive, Colossaraptor is an excellent example of the Tiny Tyrant retrosaur clade.  Her ancestors apparently competed with early birds for similar niches, as the two separate groups of animals developed some eerily similar adaptations: specifically a large, sickle-shaped claw on their innermost toes.  While this claw was used for climbing in prehistoric birds, tiny tyrants like Colossaraptor used them for combat. Her legs are heavily muscled even in comparison to her larger bretheren, and her hips are incredibly flexible to make her unusual talons all the more useful as offensive weapons.  The result is a speedy and agile predator whose attacks are eerily similar to those of a human martial artist.

Personality: Quick of limb and wit, Colossaraptor is considered a nuisance by almost every kaiju she’s met.  The swift retrosaur is notorious for making mischief wherever she goes: she startles neurotic monsters, teases aggressive ones into a rage, and will lure sworn enemies into the same area just to watch the resulting fight.  Wherever she goes, trouble follows.

She is particularly fond of annoying Cerator and Allotor, a pair of fellow retrosaurs roughly equal to her in strength.  The three monsters can often be seen running around the island in the kaiju equivalent of a prank war – one that, thankfully, never gets too serious.  There is no scientific consensus as to why she behaves this way, but it is theorized she is simply an intelligent animal that is bored by the lack of stimulation in her life.