Posted on December 17, 2016 by tyrantisterror 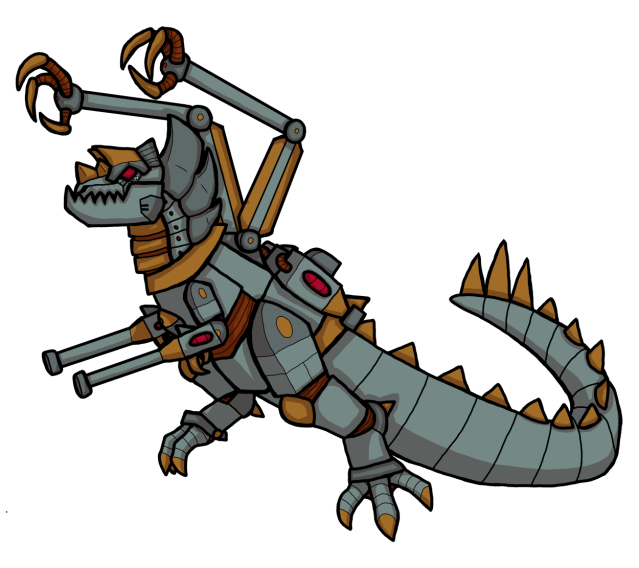 Cyber-Biology: A fusion of flesh and machine, MechaTyrantis’s mechanical systems use ridiculously advanced technology to merge computer circuitry with the nervous system of its biological components.  The result is a machine that can operate with the fluidity, reflexes, and sensory input of an animal, yet whose actions can be dictated and controled by a human pilot.  By necessity, the mechanical aspects of MechaTyrantis keep the organic ones alive, though the public has been assured that the beast at the heart of the machine has no influence on its actions.

As a hybrid of an unstoppable mutant and the most advanced weaponry known to man, MechaTyrantis boasts a variety of powers:

Personality: When working as intended, MechaTyrantis has all the personality of any other vehicle – which is to say, none save that imagined by its pilot.

MechaTyrantis does not always work as intended.

Every now and then, the primitive reptilian mind that has been haphazardly grafted into the cyborg’s computer systems will flicker into consciousness.  It is a rare occurrence – generally the monster’s mind is quiet, lost in a state not too far from a dream.  However, the right stimulus can draw the sleeping giant out of this fog.  Generally it doesn’t last long, and the beast’s brief awakening lasts all of a few seconds.  Pilots who experience these brief flickers generally chock them up to a minor tech issue, the kind one expects from new technology.

However, in a few specific moments, the monster stayed awake much, much longer.  In those moments its mind went from the fog of dreams to a storm of passionate and confusing emotions: lingering outrage from his last moments, pain and agony from the twisted wreckage that remains of its flesh and blood body, and most of all, horror at the unexplainable nightmare that is its current existence.  This tempest of feeling condenses into one single, passionate drive: hatred for every other being it can see, and for Tyrantis most of all.

One could argue whether the Terror is still alive within this cyborg weapon, or if the blue rival of Tyrantis truly died back during their climactic battle in the Underground Valley.  What none can doubt is that the Terror’s enmity lives on in the hateful grudge buried within the heart of MechaTyrantis – one that can only be sated with Tyrantis’s blood.