Posted on December 10, 2016 by tyrantisterror 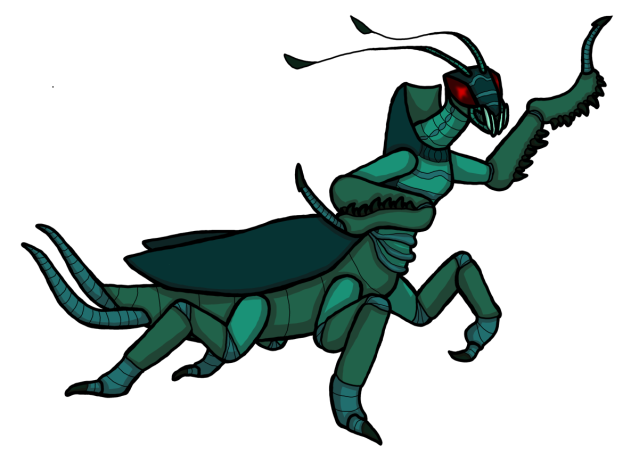 Place of Origin: The Jungle of Green Hell

Biology: Mantiresia is exactly what she appears to be: a kaijufied praying mantis.  Like her significantly smaller kin, she is a formidable ambush predator who uses cunning and precision to cripple her foes.  Like other kaiju, Mantiresia seems a bit more social and intelligent than is believed possible for creatures from her clade.

Personality: Most kaiju are fairly hard to ignore, often heralding their arrival with a chorus of roars and the smashing of buildings.  By contrast, Mantiresia is practically defined by her silence.  The massive insect defies the enormity of her size and strength by moving her mighty limbs without the slightest sound, and even the humming of her gargantuan wings is so faint that few can hear it.  Few kaiju can match her stealthy approach, and often the mantis is only noticed when it is too late to stop her strike.

One might think that her sneaky nature stems from cowardice or frailty.  Yet while Mantiresia isn’t one of the sturdiest kaiju on the planet, she is no slouch when forced to fight without an ambush advantage.  Mantiresia can use her crushing claws with speed and precision, slashing her enemies with quick strikes before crushing vital organs and limbs with her pincers.  Four of her mandibles sport long, wicked fangs that can deliver a nasty bite, and in a pinch even her legs can deliver some nasty kicks.

When not on the offensive, Mantiresia is a dour creature to be around.  She generally stand still in place and observes her surroundings, reminding more than a few observers of a gargoyle or some other sort of grim statues.  Many other kaiju avoid the mantis just for the sheer macabre air she exudes, and even those with bold dispositions have been spooked when the stoic mantis suddenly moves.

Still, despite her quiet and foreboding air, Mantiresia has made some comrades.  Both Girtabane and Chlorespa will actively seek her company, and the former has made a habit of fighting alongside her.  The mantis seems aware of their loyalty, and has been noted on a few occasions to come to their aid when they are in trouble.  This is but one of many examples of the strange social relationships found between wildly different kaiju.