Posted on November 15, 2016 by tyrantisterror 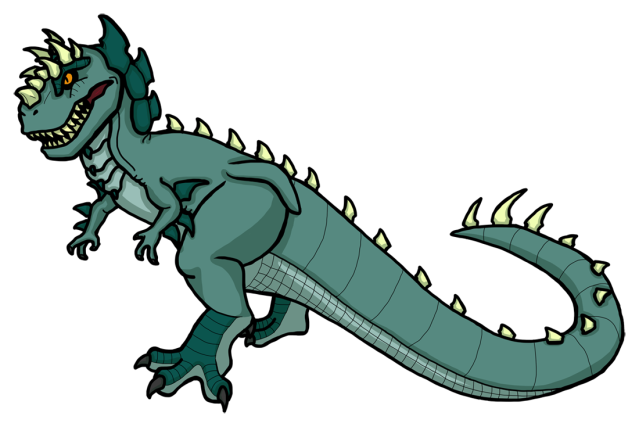 Place of Origin: The Underground Valley

Biology: A member of the same species as Tyrantis and Tyranta, “The Terror” is a member of the Paleo Tyrant clade of the Retrosaur Family.  While his peers lived up to the clade’s infamous pop culture reputation, the Terror acts more like scientists would expect a large predator to act: an opportunistic predator that prefers easy targets to challenges and avoids violence whenever possible out of sheer pragmatism.  Interestingly, the Terror displays different coloration than the other adult male specimen of his species, making scientists wonder whether this is some sort of aberrant mutation or evidence of different color morphs within the species (beyond simple sexual dimorphism).

Personality: Compared to his more famous kin, the Terror seems unimpressive.  Both Tyrantis and Tyranta are above average specimens of their species – Tyrantis being uniquely intelligent and fit, and Tyranta being an absolute juggernaut.  By comparison, the Terror is decidedly ordinary.  Not particularly smart or clever, and far from a notable physical specimen, he only stands out from the other known adult specimens of his species by exhibiting a sort of low cunning, fighting “dirty” by the standards of his warrior kin.

A scheming coward, the Terror preys on the weak, picking fights with sick, elderly, and especially young kaiju to prove his power while running from a fair fight with those that are his equal or superior in combat.  He prefers to avoid stronger foes when given the chance, and on some occasions will even lure them into the territory of another equally strong and belligerent rival in hopes that they might kill each other.  The Terror only likes to fight his own battles when he knows he can win by a landslide, although he will pick a fight with stronger foes if he feels his back is against the wall, or if they take something he desperately wants.

Despite this, the Terror nonetheless has the same pride and ego his stronger kin display.  He has deep feelings of entitlement from those in his territory, and will plot against any who disrespect or challenge his perceived authority.  While he still won’t face the problem head on by choice, he will use all of his guile to lead his perceived foes into a deadly situation as soon as possible.

While selfish, the Terror is a social animal like other members of his species, and deeply longs for companionship – albeit not an equal one, as his views on affection are rather one sided.  It baffles him that he is not followed by admirers desperate to be in his pack, and any rival that beats him in this regard is held with utter contempt.